Borsalino celebrates its deep and lasting relationship with the world of cinema by introducing ‘The Bogart by Borsalino,’ a special collection dedicated to Humphrey Bogart, the great Hollywood actor who was a loyal Borsalino customer.

The relationship between the Hollywood actor and the Alessandria-based firm was always a special one, and became legendary thanks to Humphrey Bogart wearing the unforgettable Borsalino fedoras from his personal collection in many of his most iconic film roles.

Created in collaboration with the Humphrey Bogart Estate, The Bogart by Borsalino is now available in 4 models.

If you think of the great Humphrey Bogart, both on set and in his daily life, a flood of descriptions most certainly comes to mind: elegant, casual, charismatic, iconic, versatile, and without a doubt his incredible sense of personal style. Dedicated to this kindred connection,  Borsalino launches its fifth series collector’s hat the Bogart by Borsalino Cut 5  in exclusive partnership with the Humphrey Bogart Estate. The shape is one of Humphrey Bogart’s absolute  favorites,  with a high dome and medium brim, exclusively in warm turmeric shaved felt, the fedora style is cleverly  paired with a floral hat band that sports a poppy motif and the elegant lines recall Borsalino’s sophisticated collection approach. Influenced  in-part by 19th century  Decandentism  movement, where excess was both celebrated and cursed,  and in perfect  synchronicity,

inside the hat is one of the actor’s famous and humorous expressions - “Never trust a man who doesn’t drink” , imprinted on the internal brown leather Moroccan band. Additionally, the Bogart by Borsalino Cut 5 is featured with a collectible and dedicated hat box, inspired by the actor’s legendary 1952  Oscar win for his role in British-American film “The African Queen”  (John Huston 1951.) 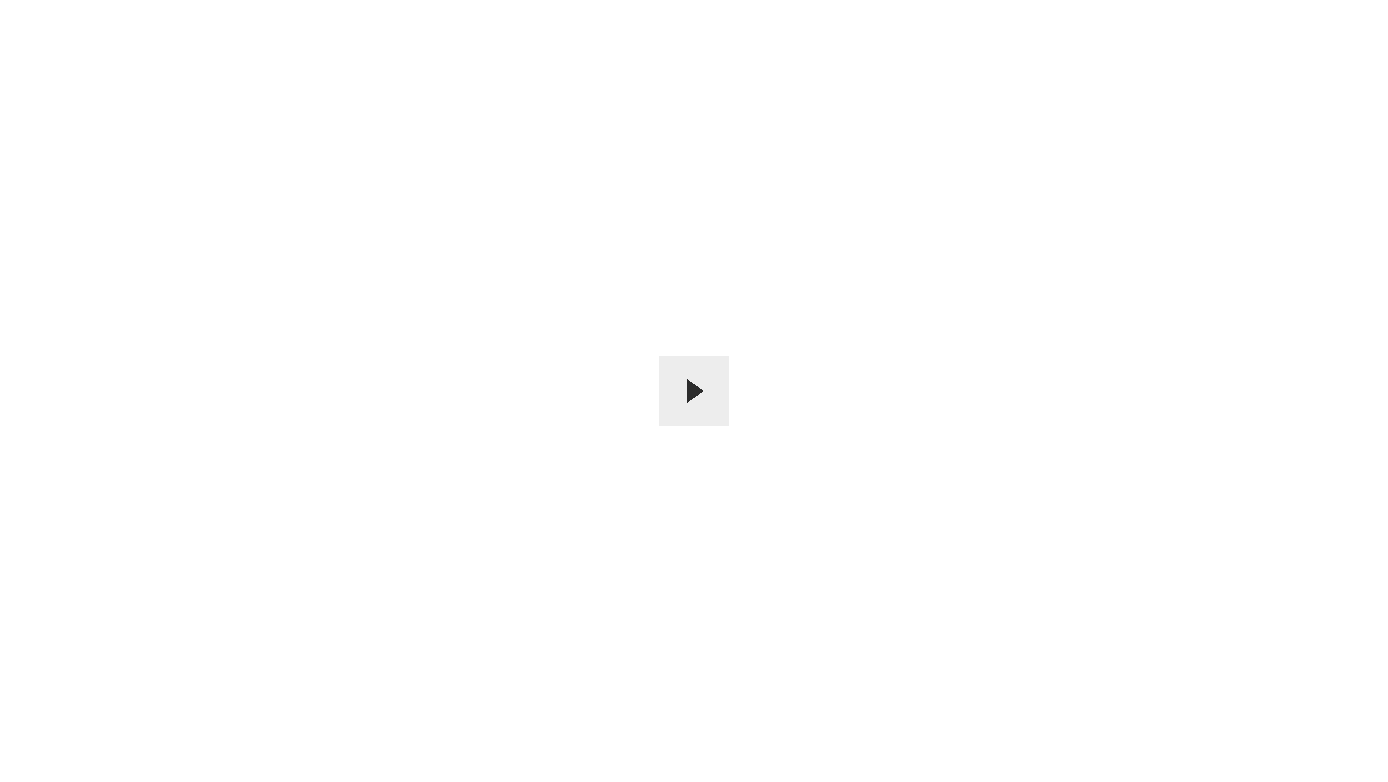 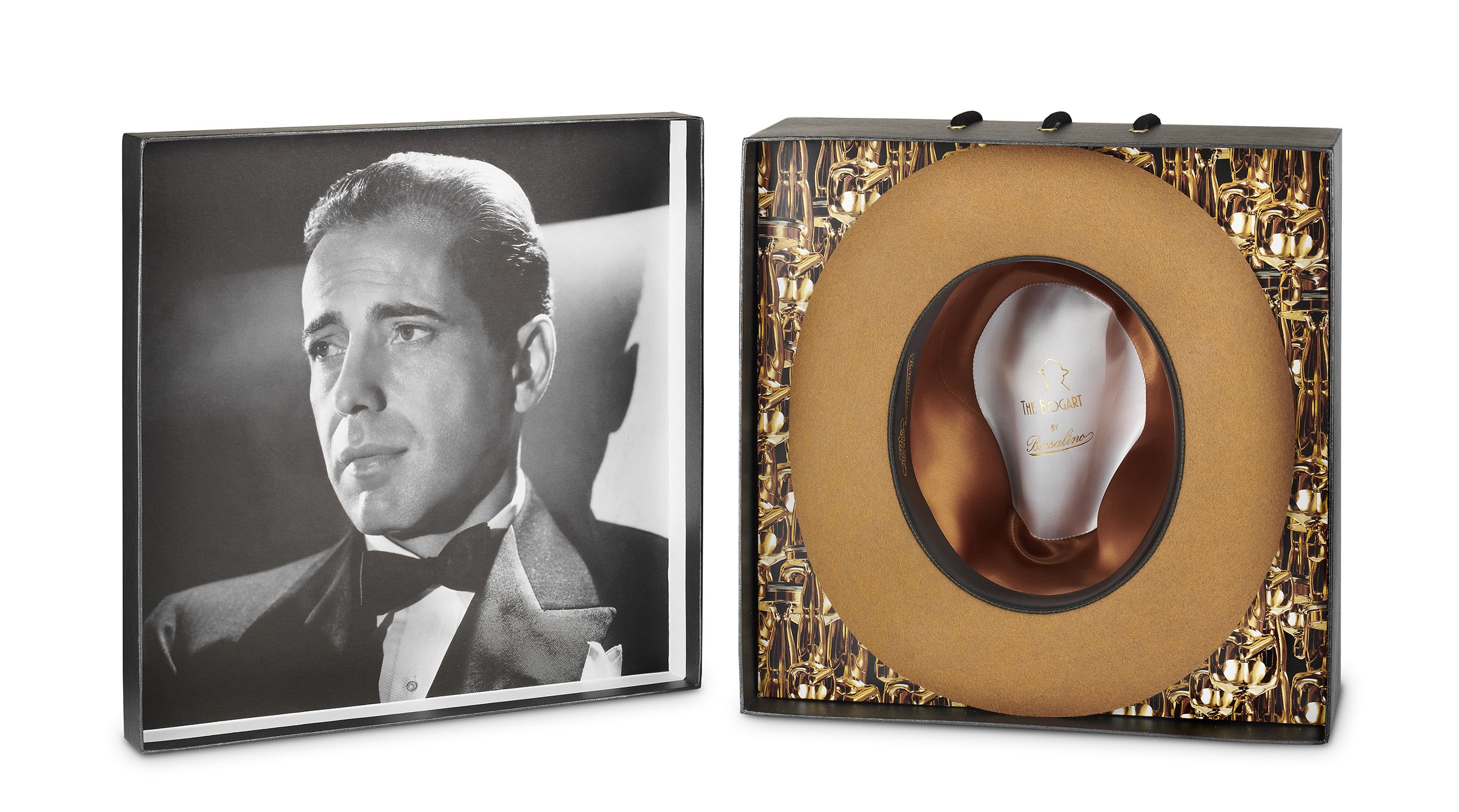 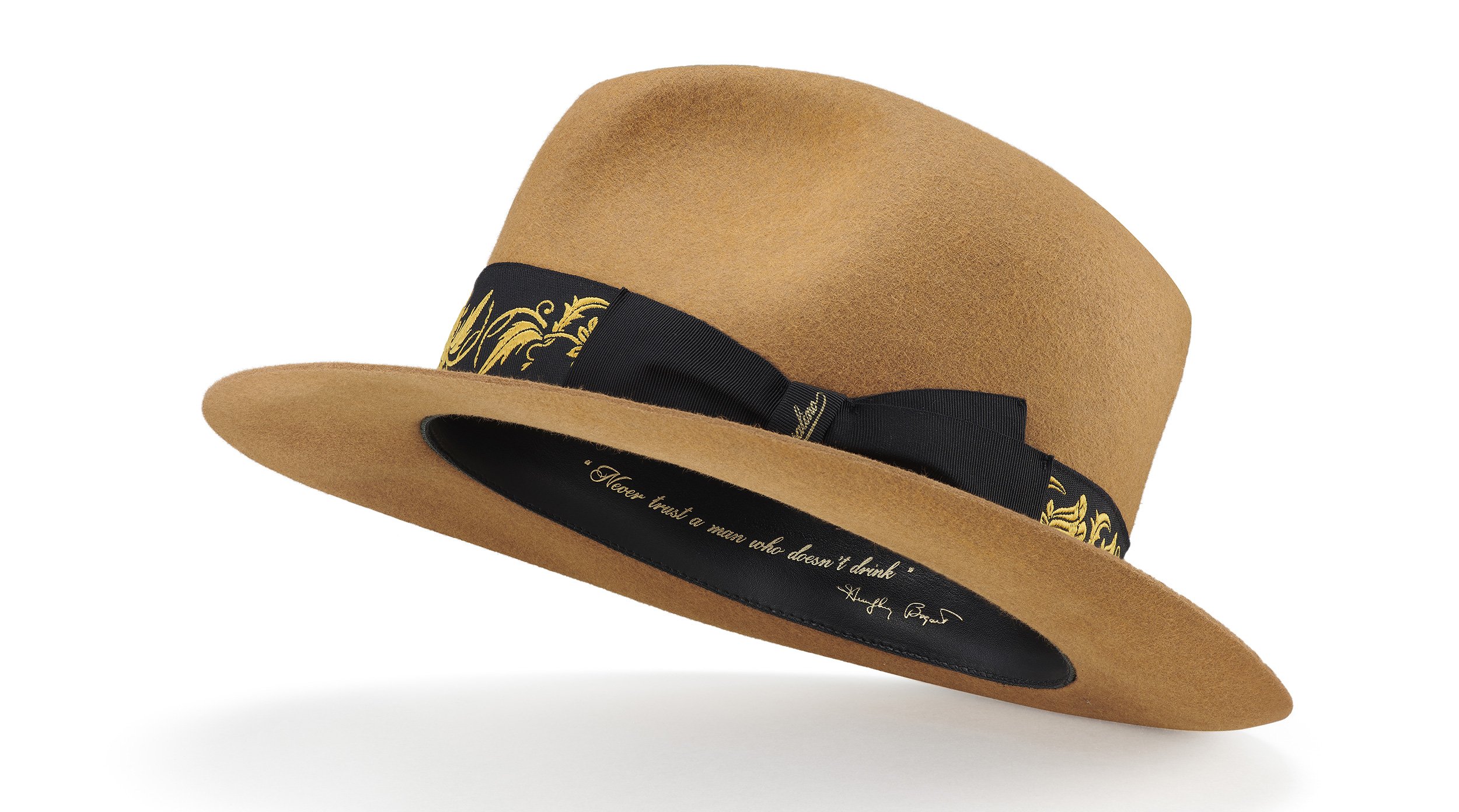 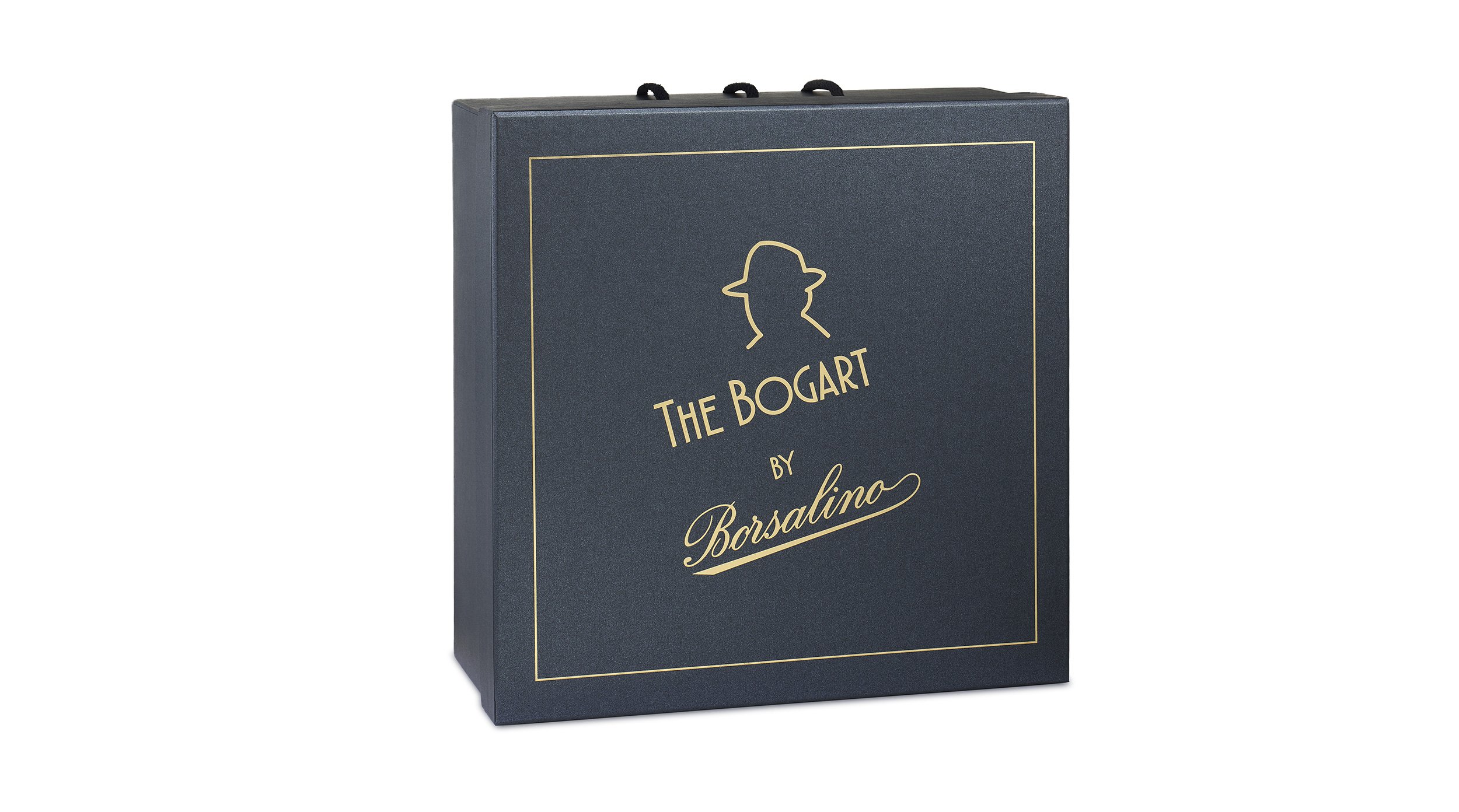 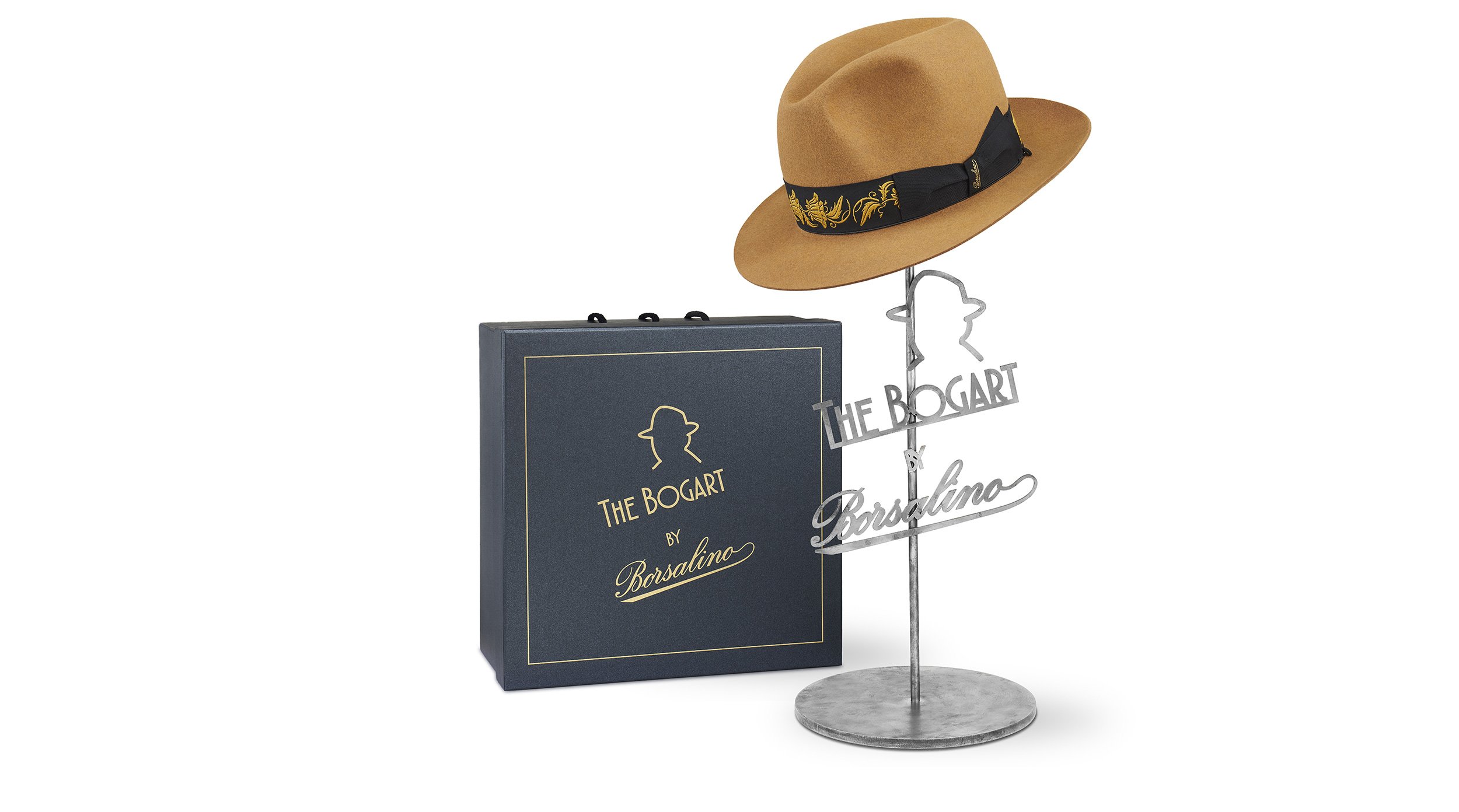 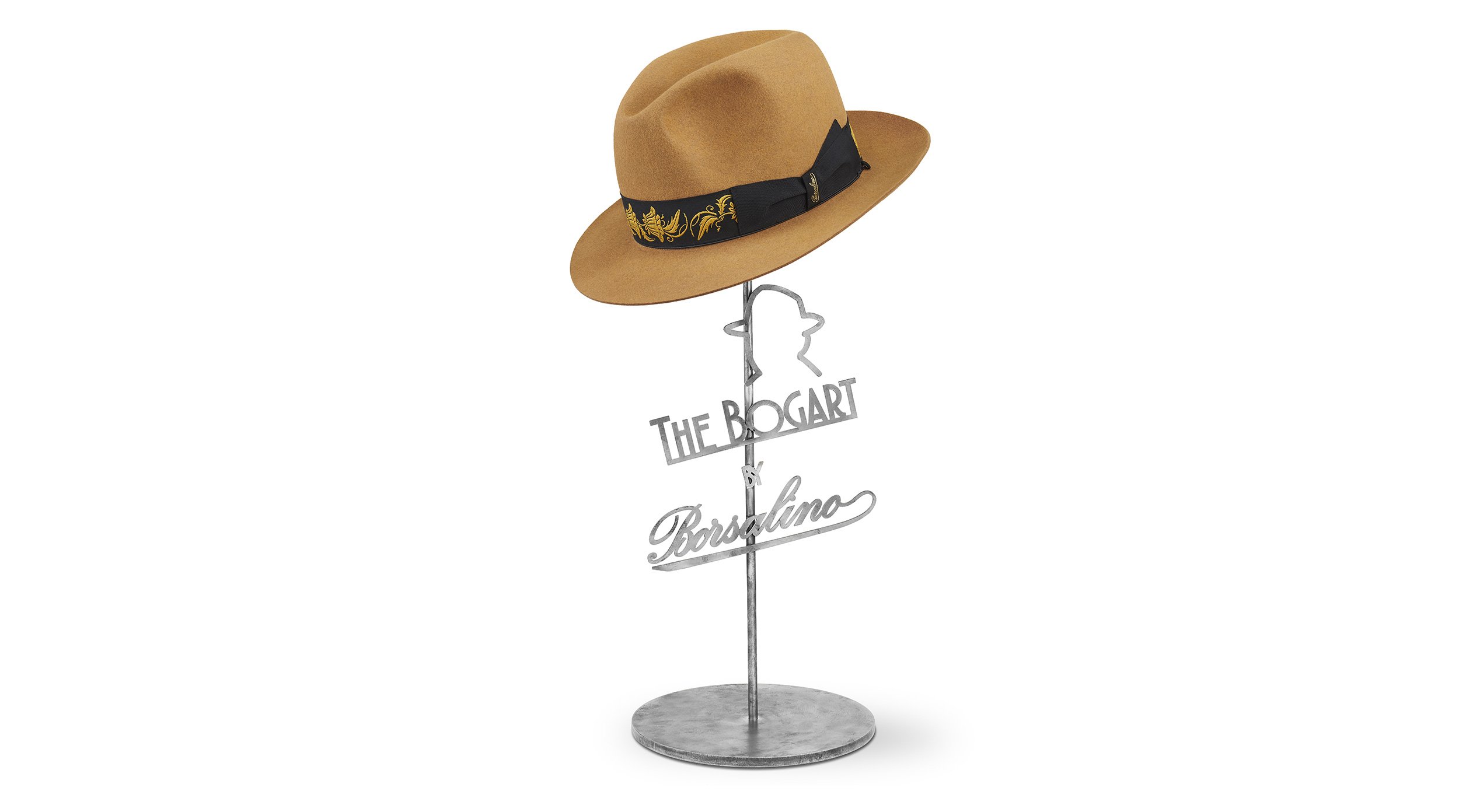 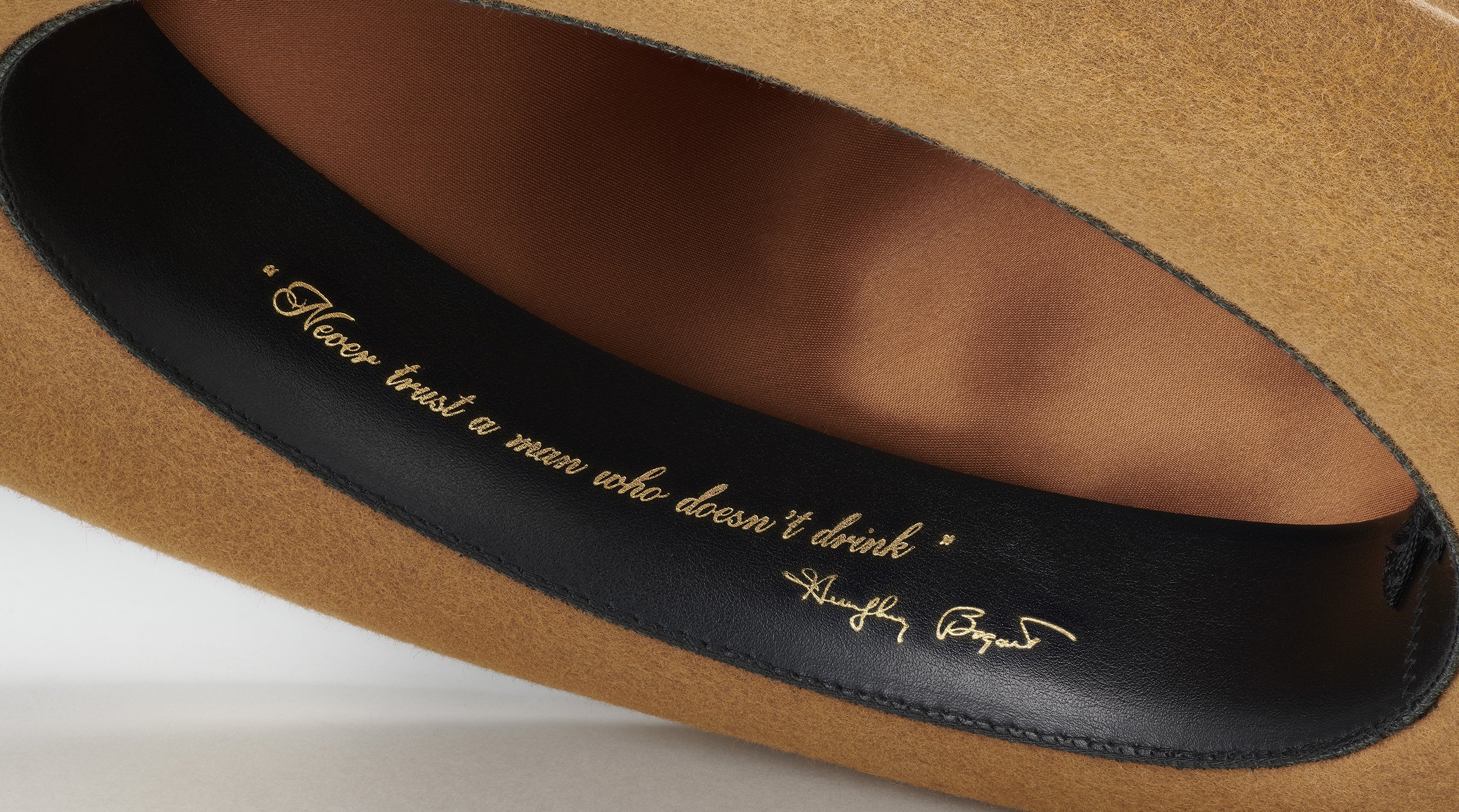 "A character has to be slightly nuts. I suppose I am."

Borsalino celebrates the legendary Humphrey Bogart with a dedicated SS20 collectible, The Bogart by Borsalino Cut 4. In soft shaved felt and available in black or beige, the hat features an unedited Waving Tulip ribbon motif and vintage-inspired drawstring with a button that can fasten the hat to the buttonhole of a jacket.

Two dedicated tributes adorn the inside of this special edition:  a stylized Bogart silhouette engraved on the satin lining  and one Bogart’s most famous phrase, "A character has to be slightly nuts. I suppose I am" imprinted on the internal  brown leather Moroccan band. The Bogart by Borsalino Cut 4 also comes with its very own hatbox, inspired by the great Hollywood actor. 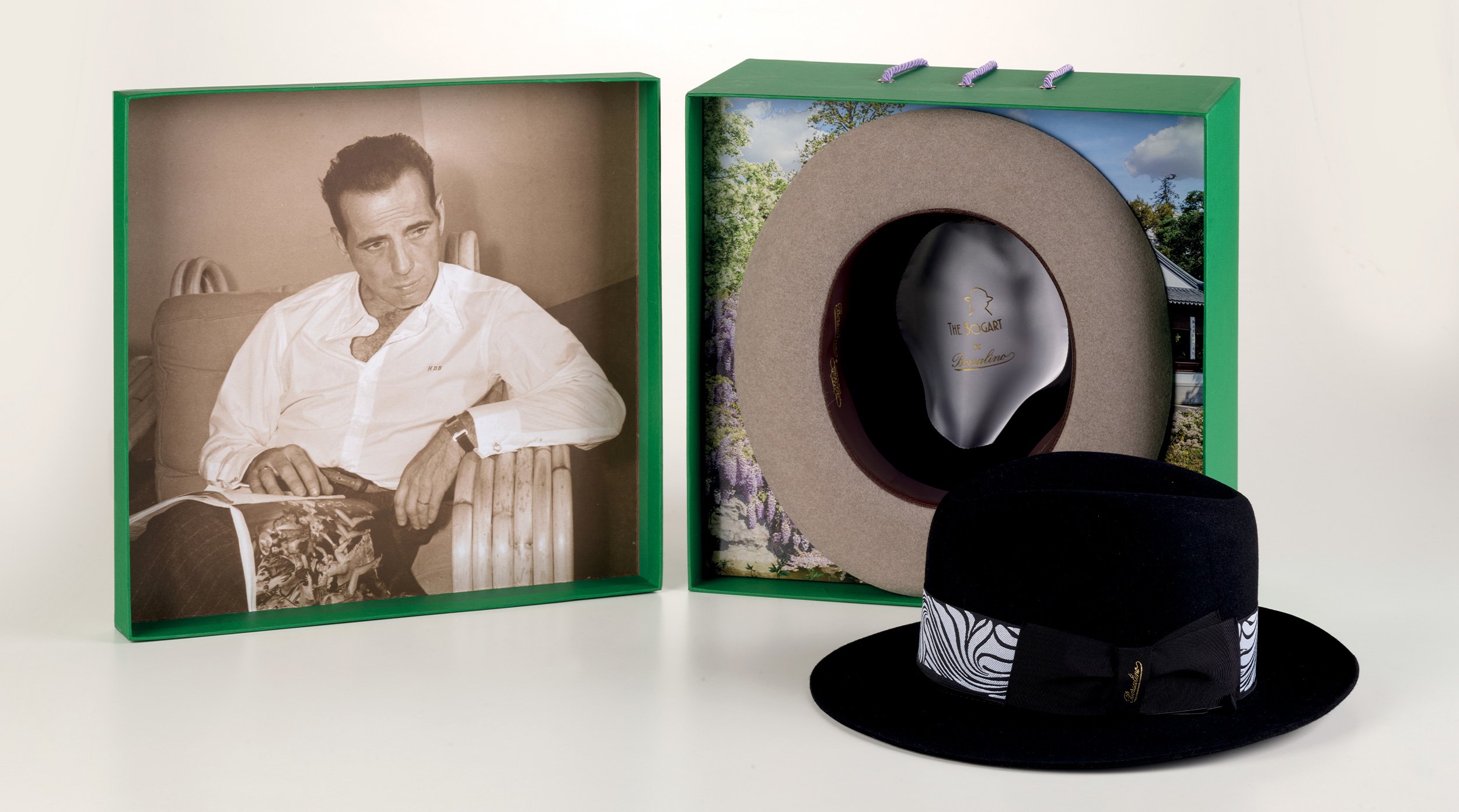 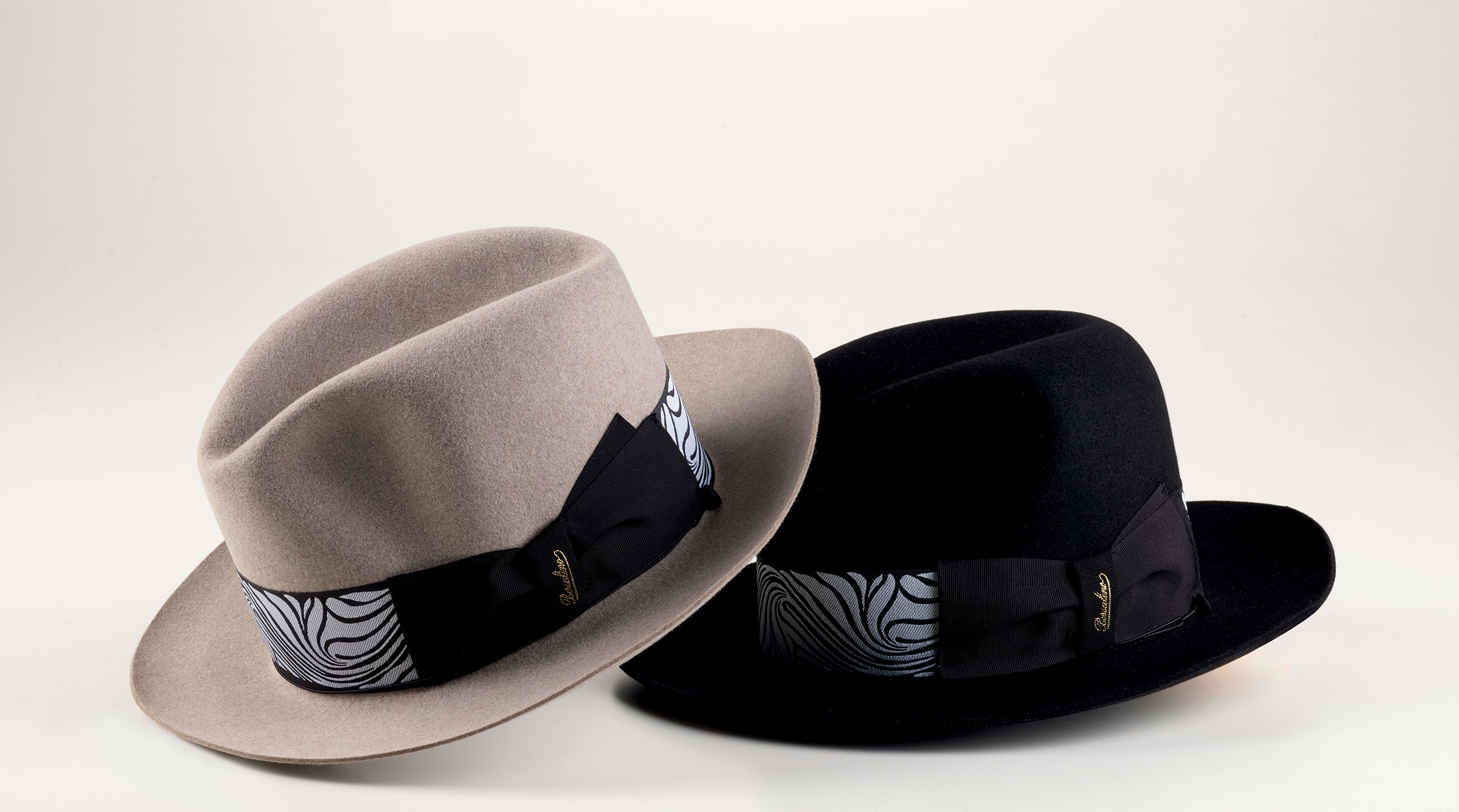 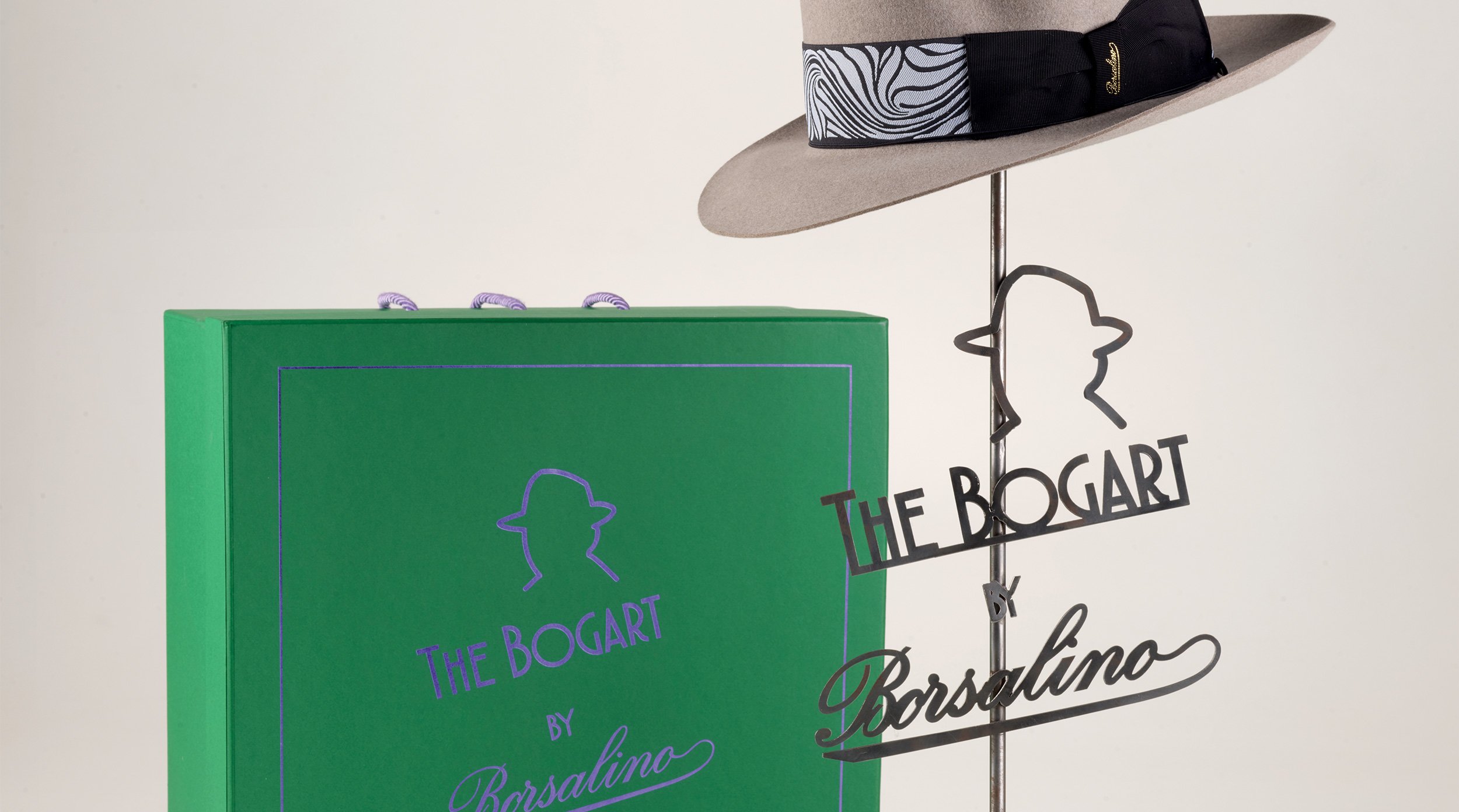 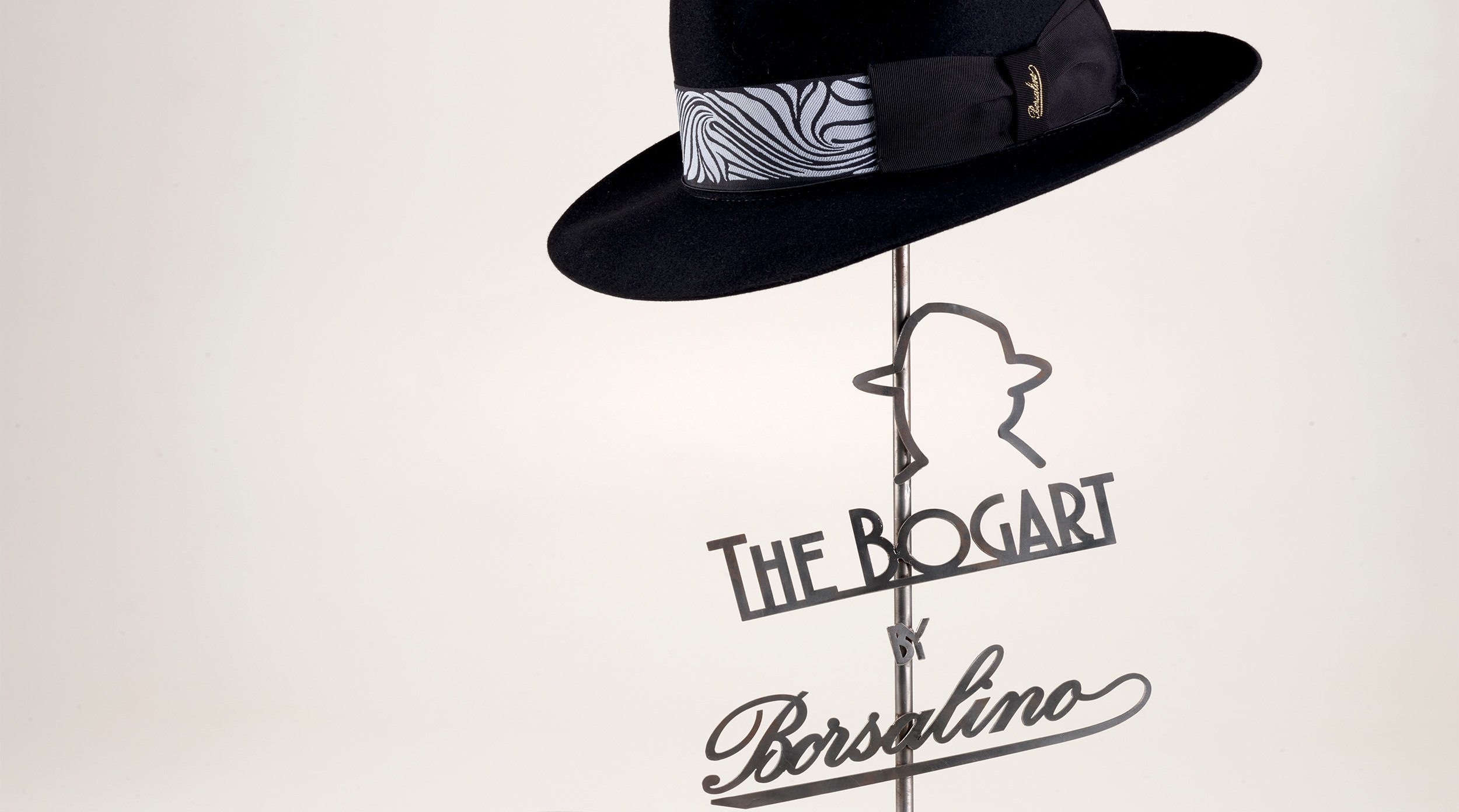 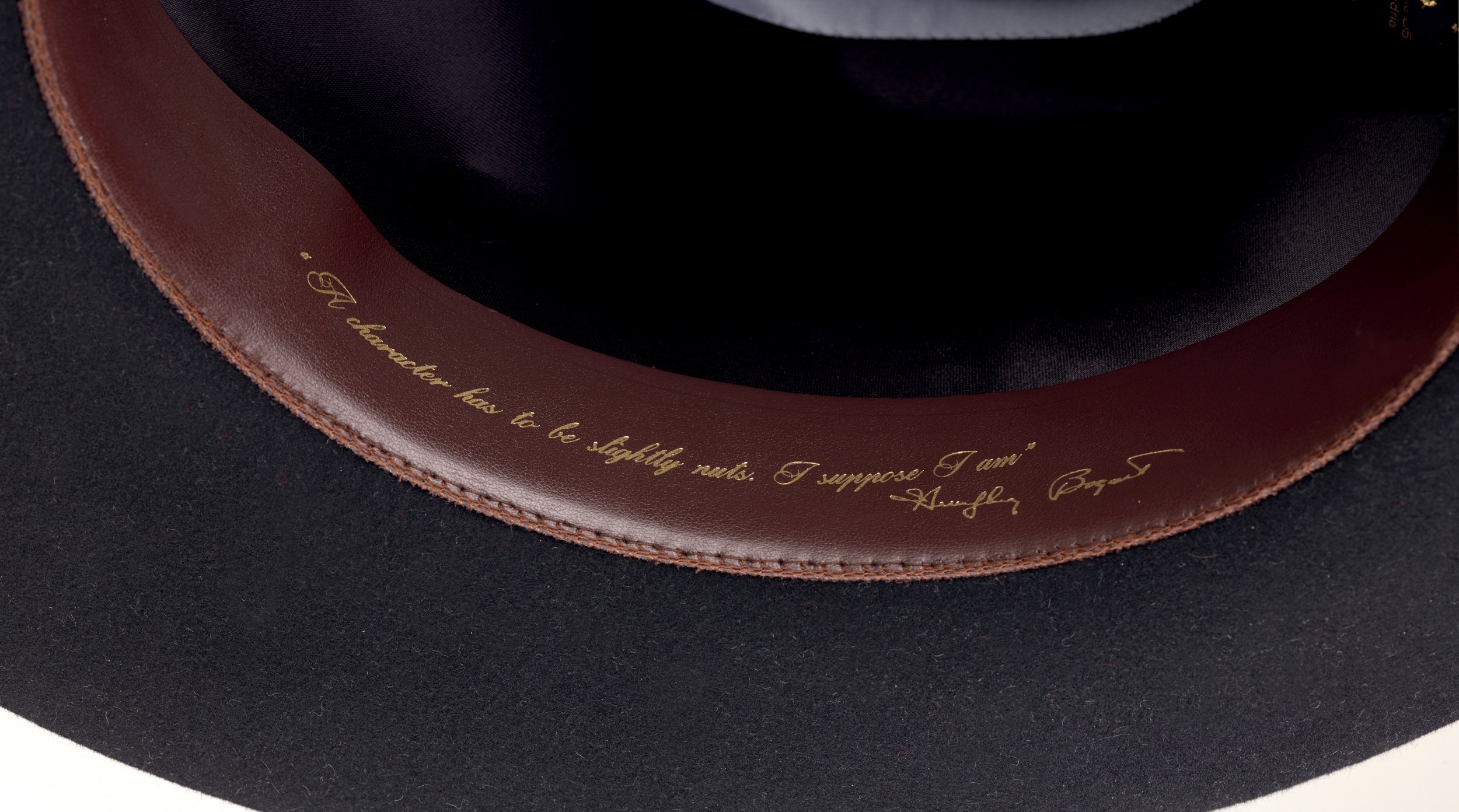 ”THE ONLY THING YOU OWE THE PUBLIC IS A GOOD PERFORMANCE."

In honor of the great actor Humphrey Bogart, who always wore Borsalino hats on screen and in his daily life with such inimitable style, Borsalino launches its third season collectable the Bogart by Borsalino Cut 3 hat in collaboration with the Humphrey Bogart Estate and celebrated with a new social media campaign featuring Justin Gossman, renowned model and US rock-band Toy Guns frontman.

Designed for Fall Winter 2019/20, the Bogart by Borsalino Cut 3 is a reinterpretation of the iconic hat the Hollywood actor loved so much: a high crown and medium brim, personalized with blueberry shaved felt and an exclusive two-color band with Jacquard print. The inside of the hat boasts two special tributes to Bogart: a stylized silhouette of the actor featured on the satin lining and one of his most famous quotes: “The only thing you owe the public is a good performance,” imprinted in gold lettering on the black leather inner band. The Bogart by Borsalino Cut 3 also features its own exclusive hatbox. 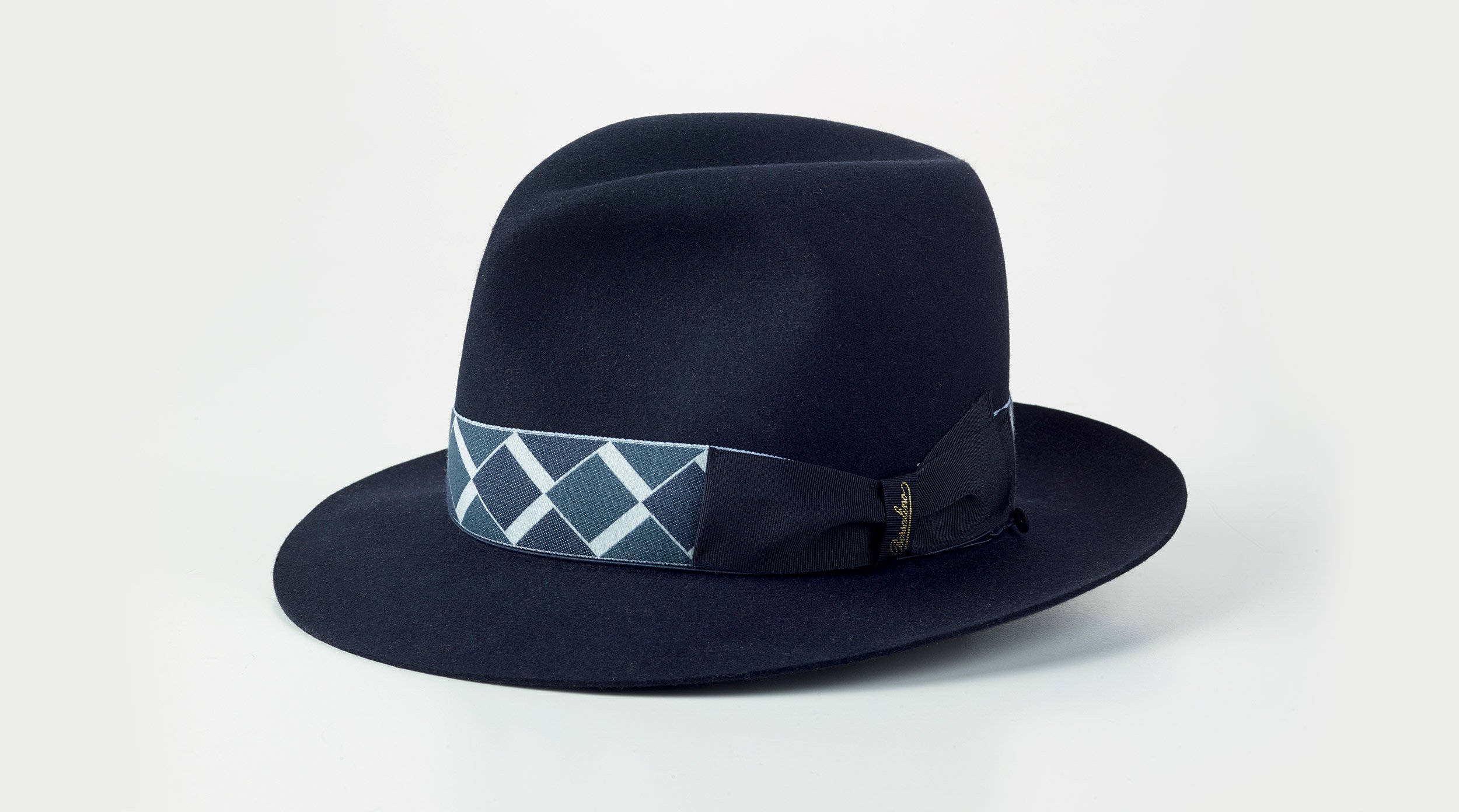 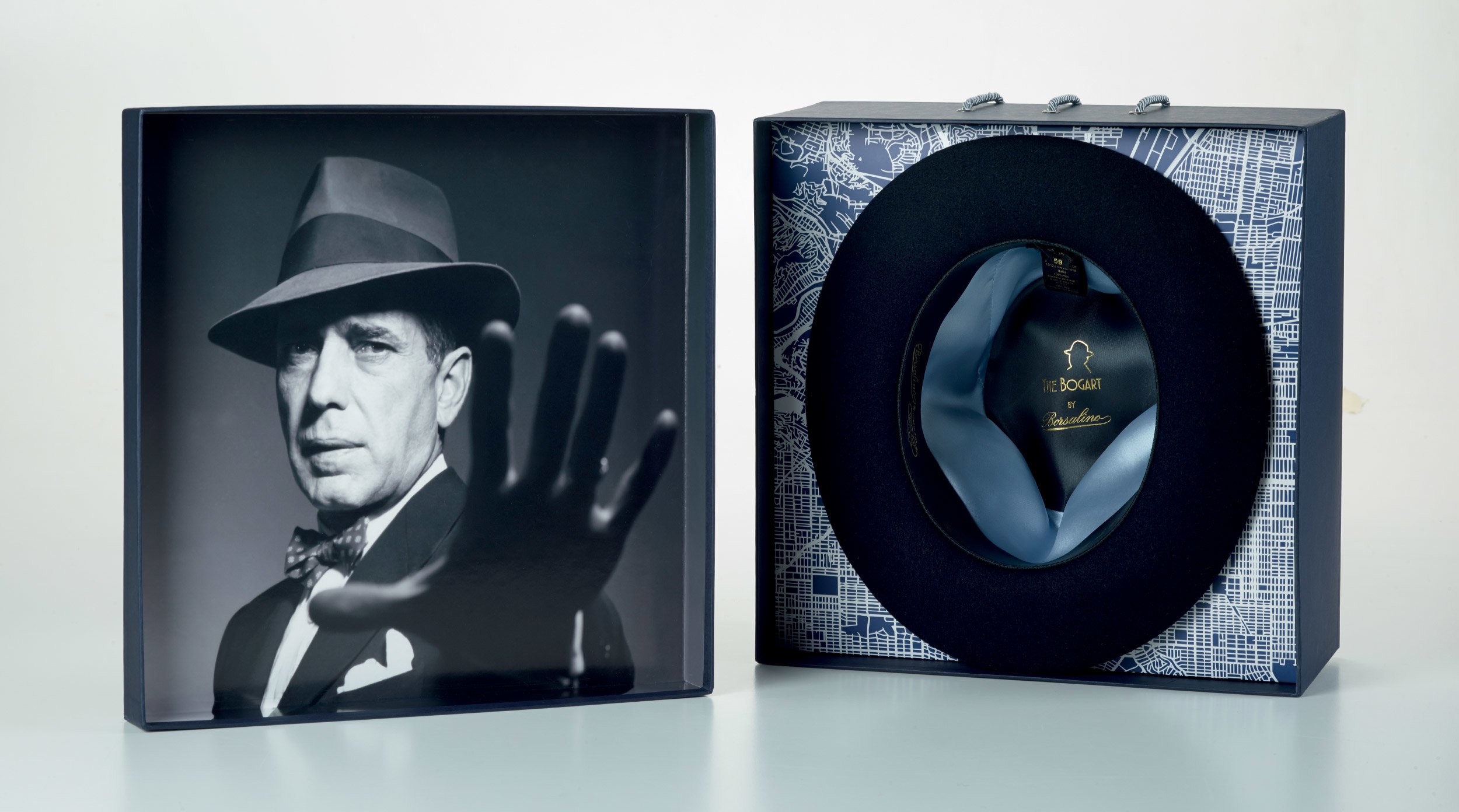 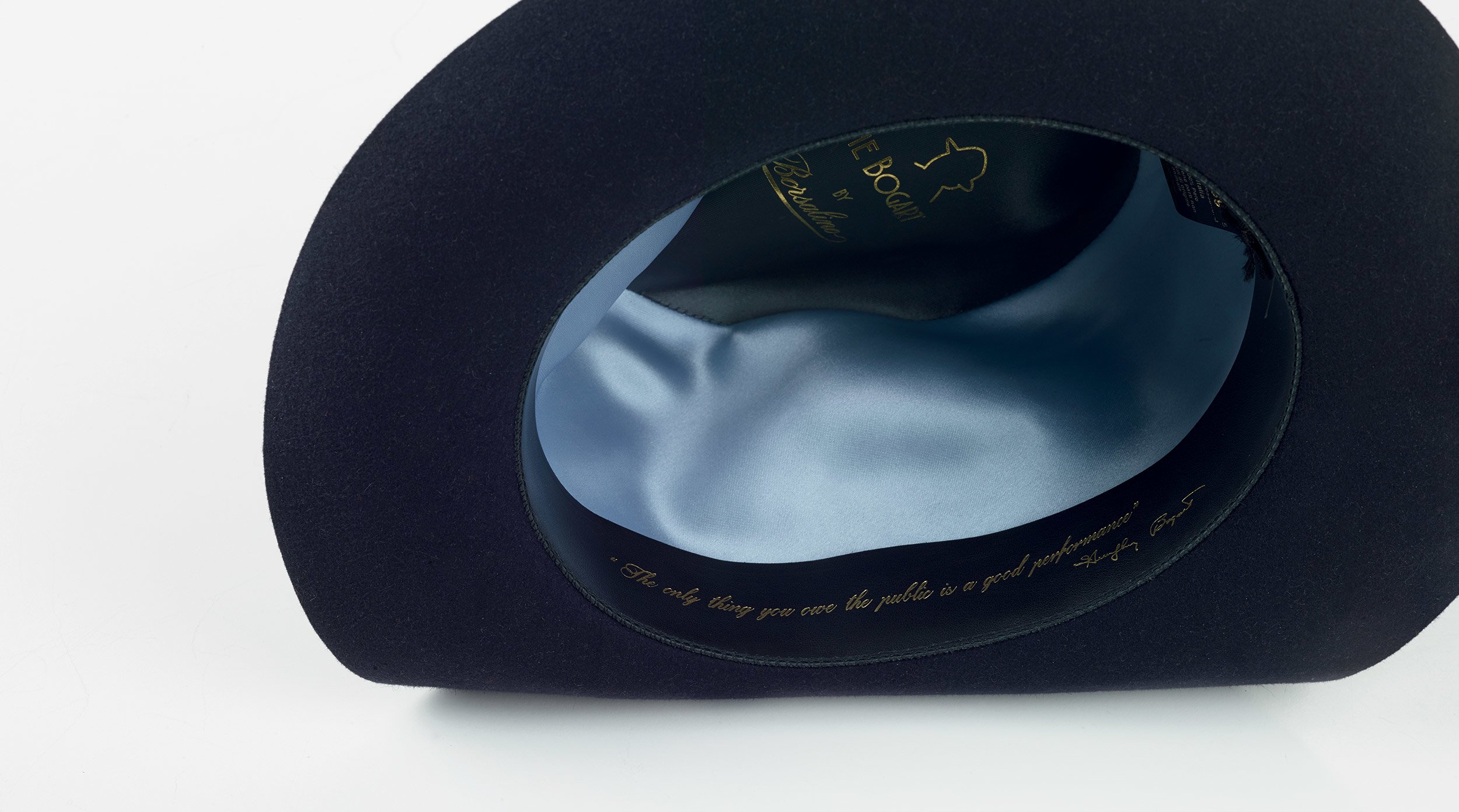 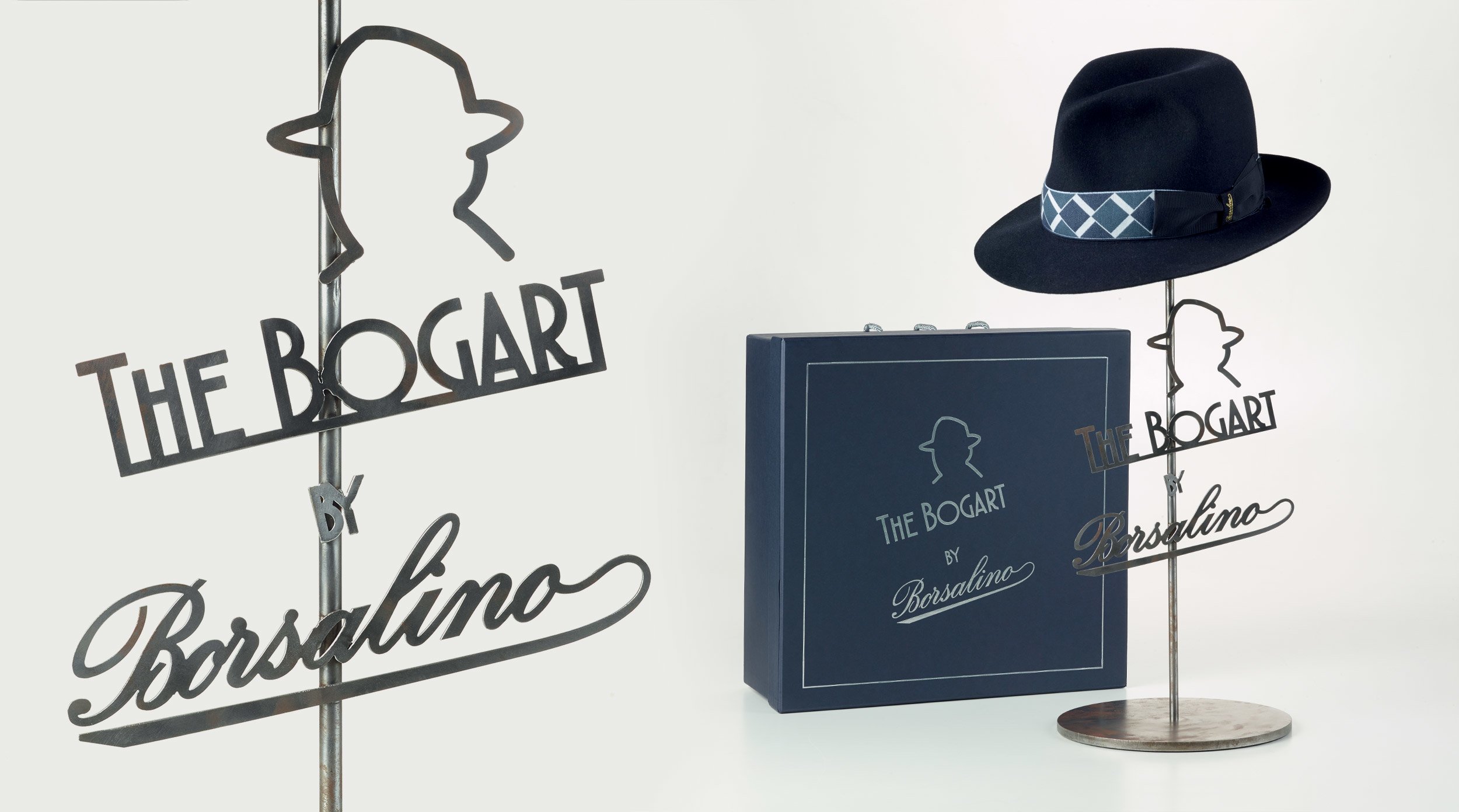 "AT HEART I AM A LOVABLE CHARACTER."

The CUT 2 model is the iconic one with a medium brim and a high crown, a design created for Hollywood stars in 1930 and which was especially loved by Humphrey Bogart. The hat lives again in a collectable version which combines shaved felt in the special Jorasse color with a grosgrain ribbon in the same shade, finished off with the characteristic bow with the Borsalino logo printed on it.

Inside the hat there are two special tributes to Bogart: a stylised silhouette of the actor features on the satin lining, while the brown leather inner band has an imprint of one of his most celebrated expressions, “At heart I am a lovable character.” The Bogart by Borsalino Cut 2 also boasts an elegant hatbox dedicated to the legendary Hollywood actor. 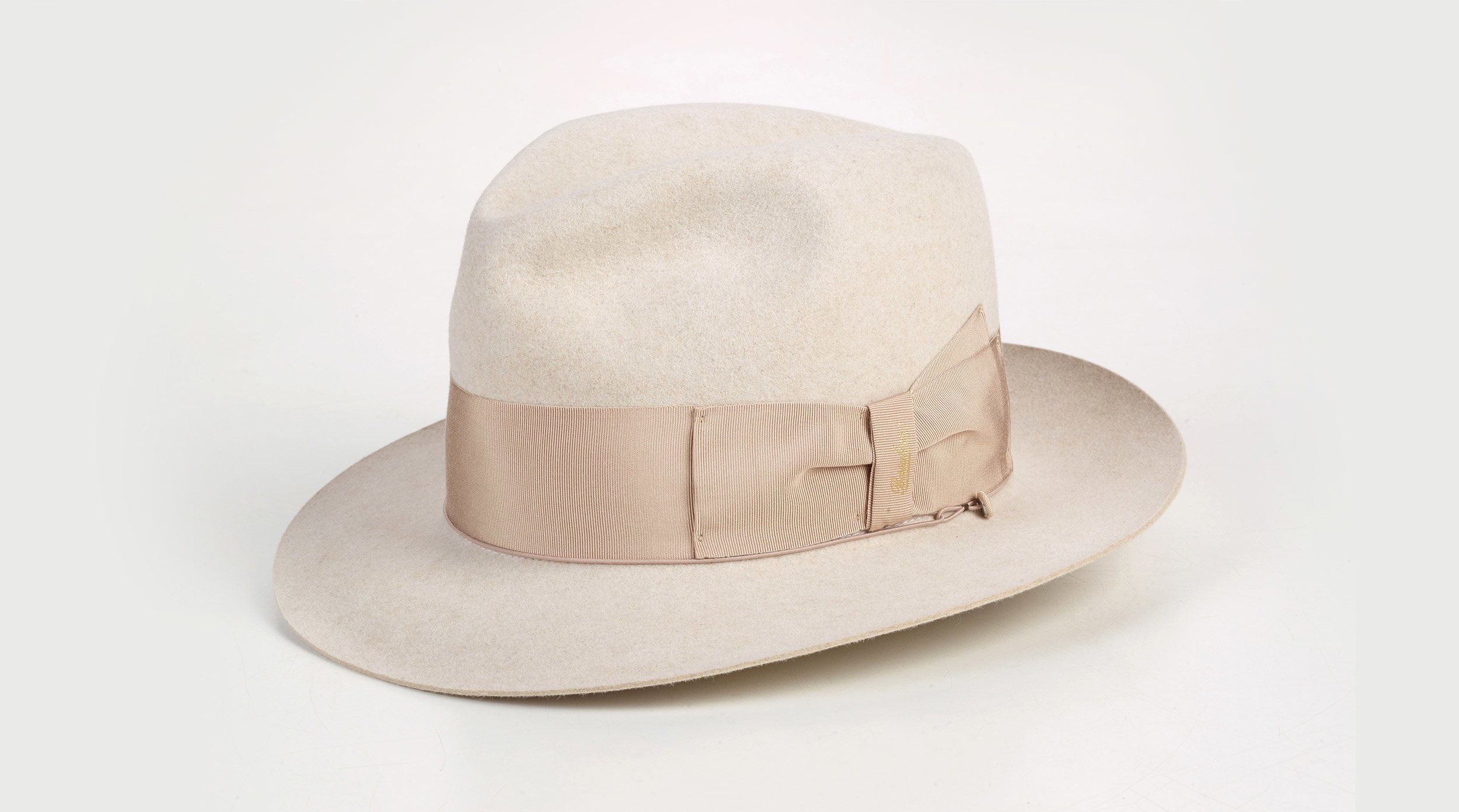 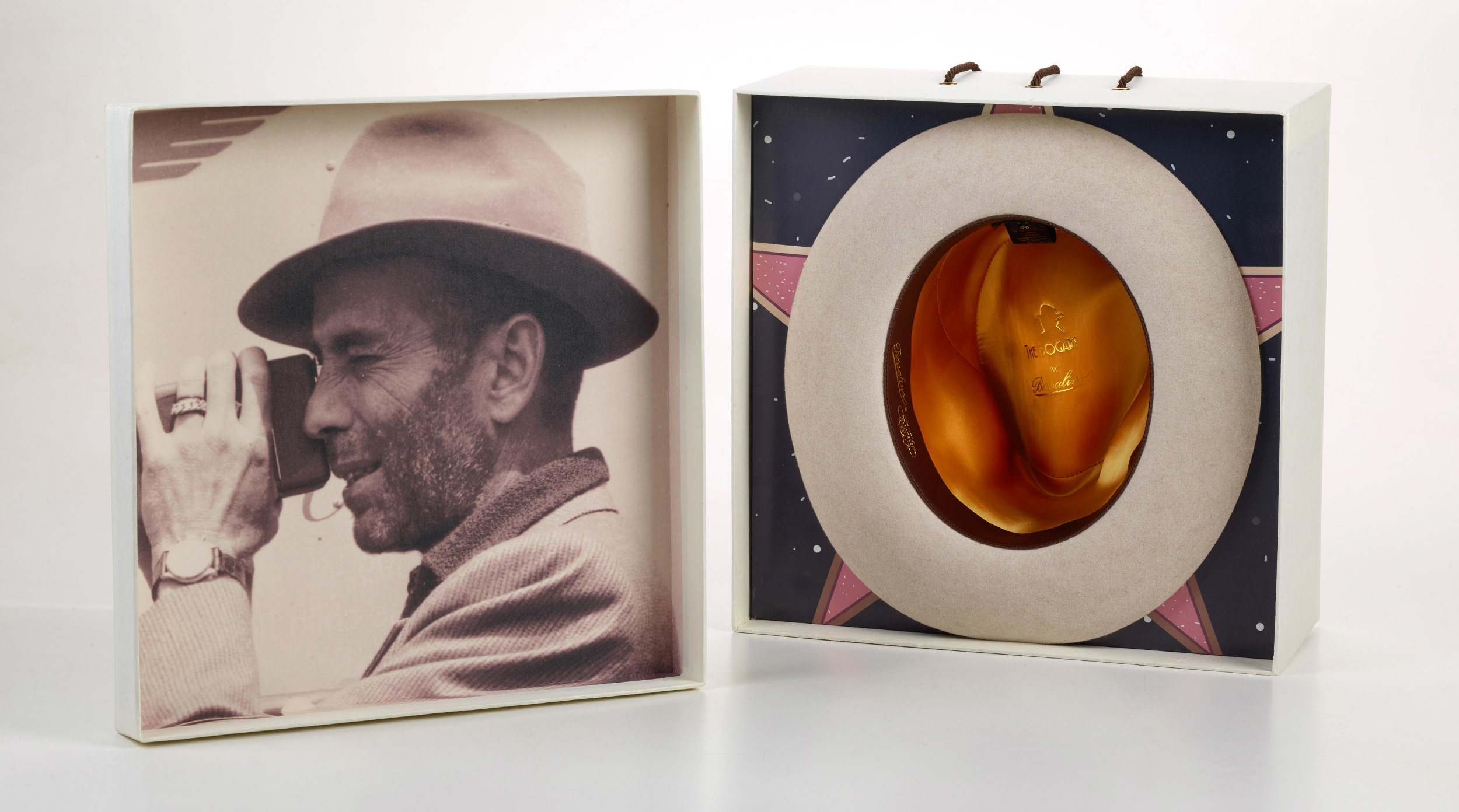 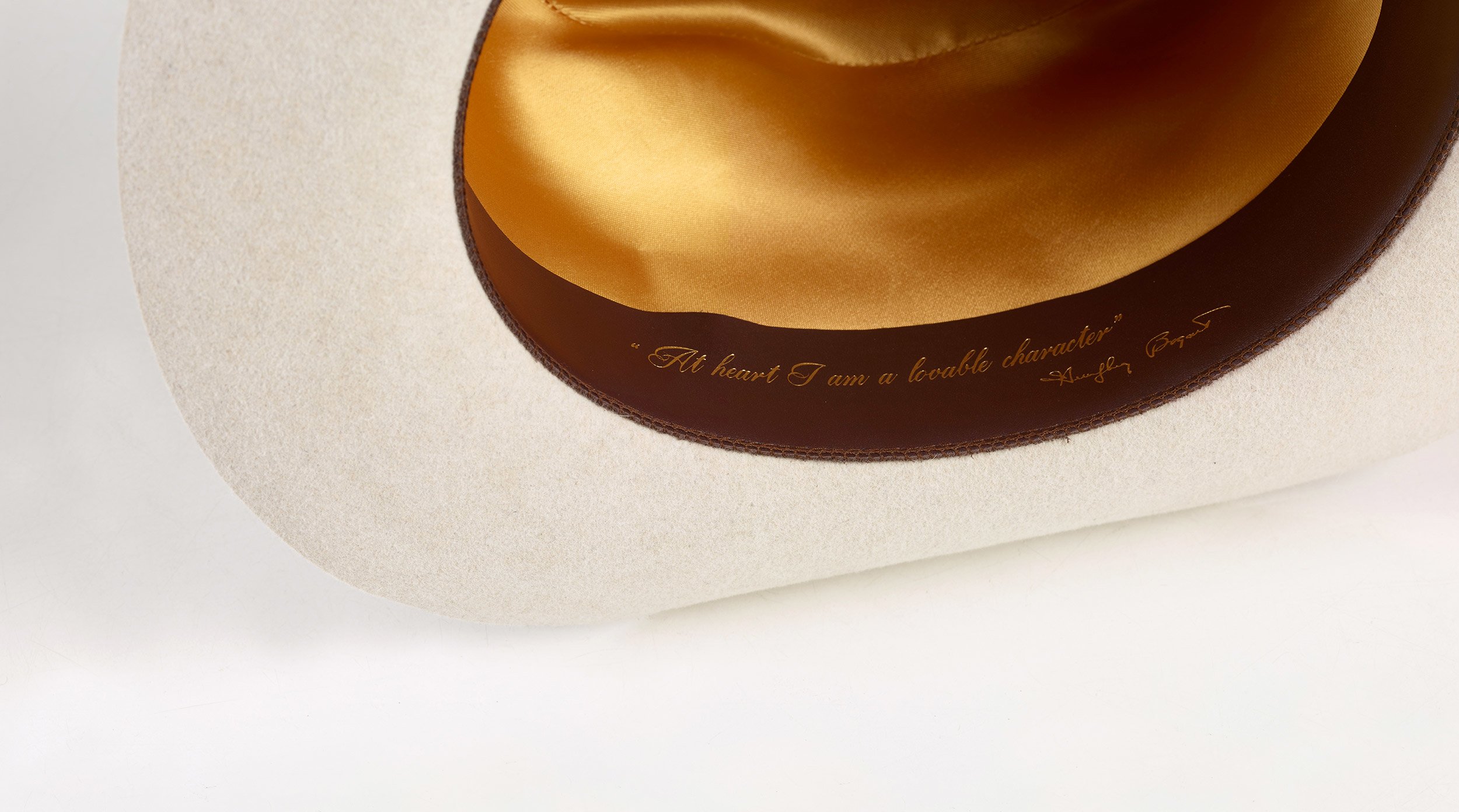 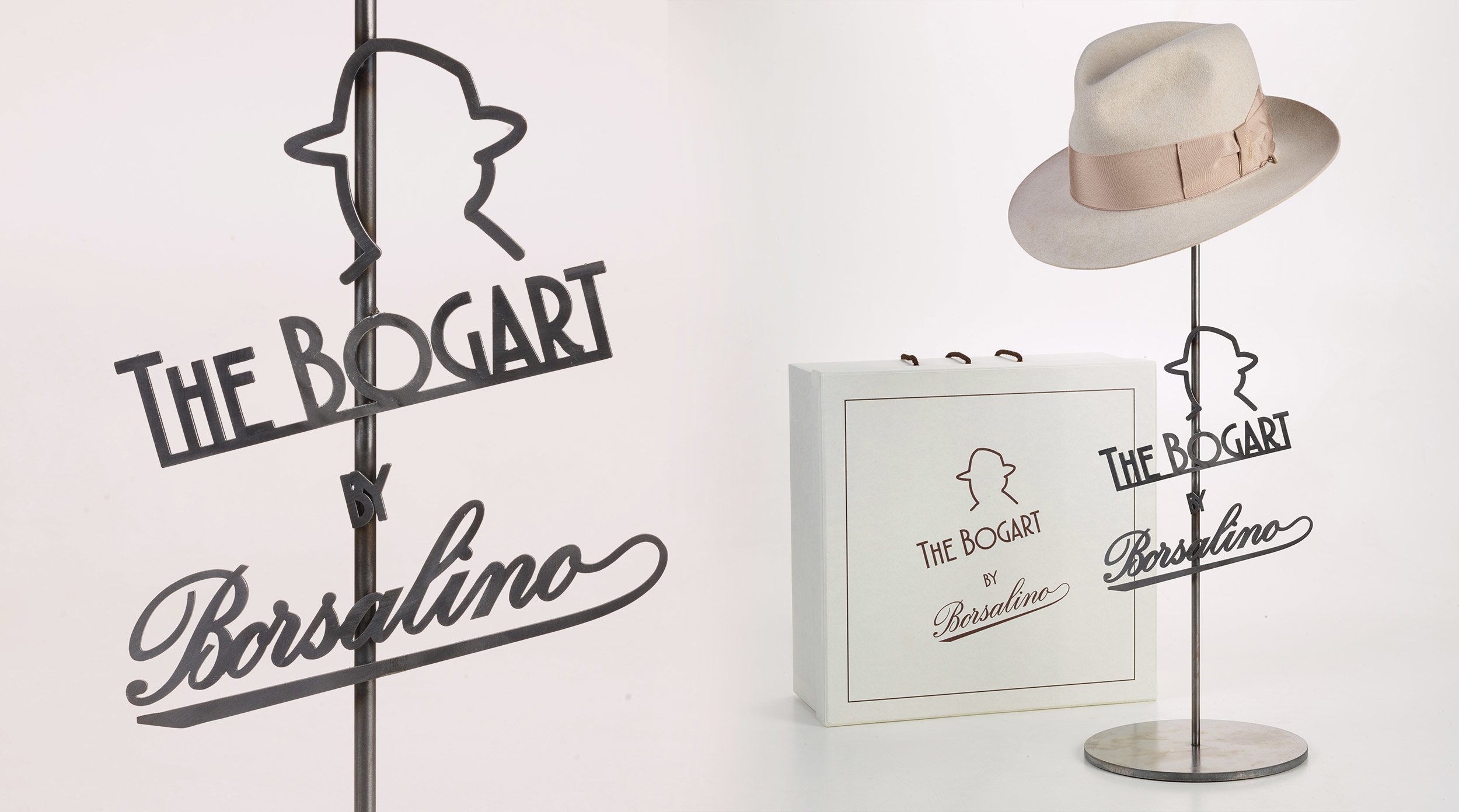 ”DO EVERYTHING. ONE THING MAY TURN OUT RIGHT."

The CUT 1, created from a precious mixture of hare and rabbit fur, reinterprets the typical shape of the fifties with a medium brim and a high dome. The gray “Sebino” felt has been matched with a charcoal Gray Canneté belt, closed by the ribbon with the characteristic logo of the legendary brand.

Inside, next to the gray satin lining on which Bogie’s silhouette and the Borsalino logo stand out, the hat conceals a secret: on the Moroccan black leather band, one of Humphrey Bogart’s iconic expressions is engraved in gold: “Do everything. One thing may turn out right.” 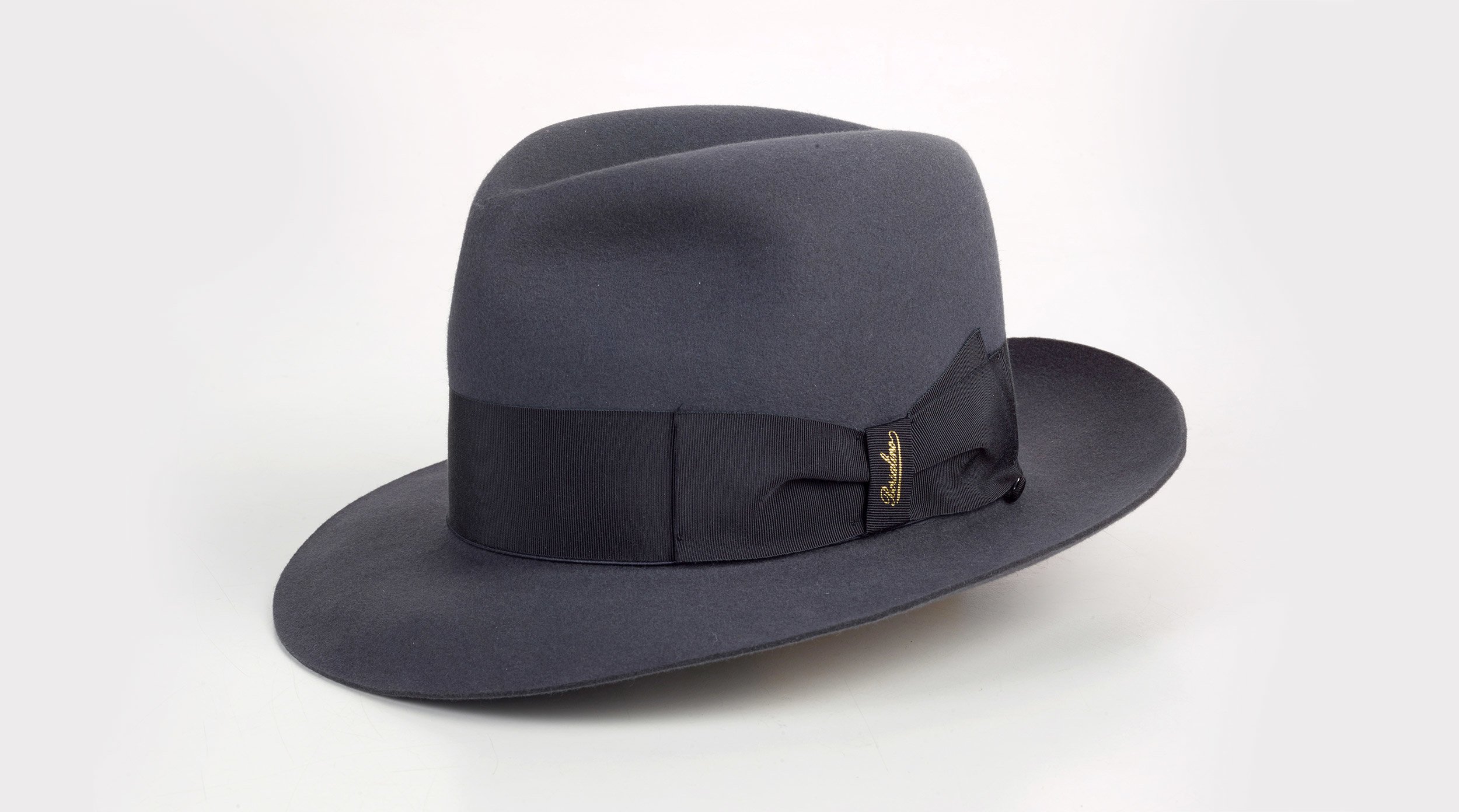 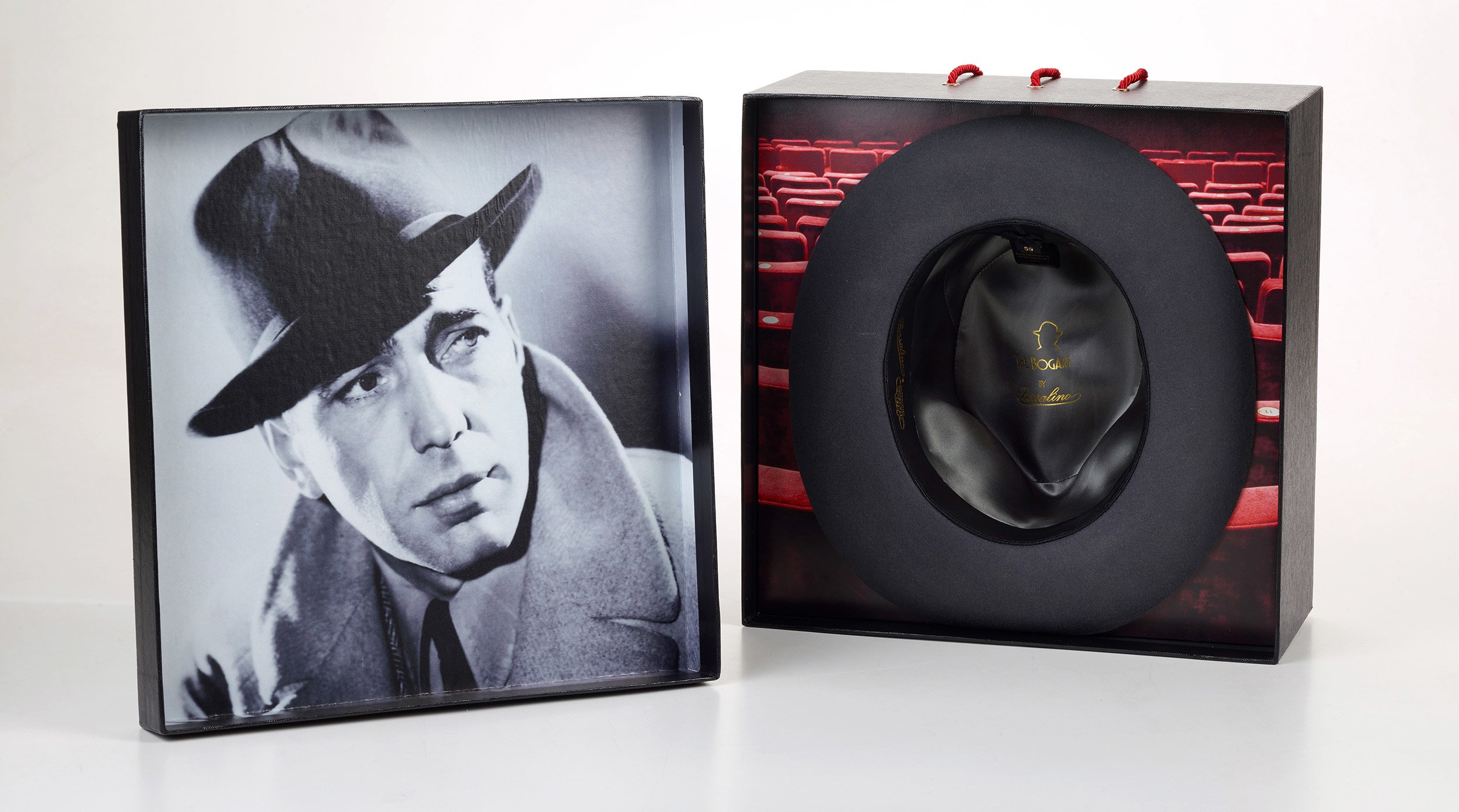 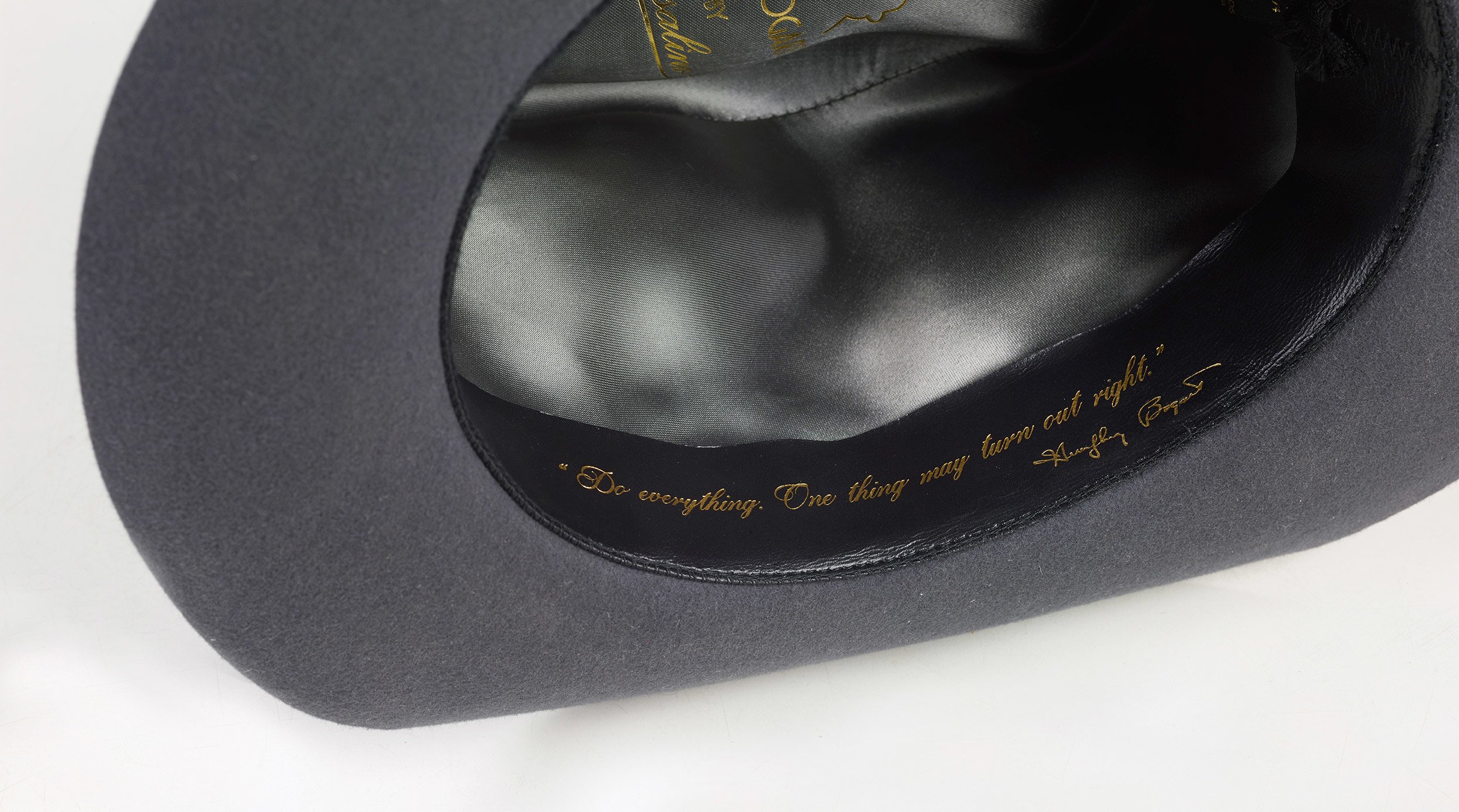 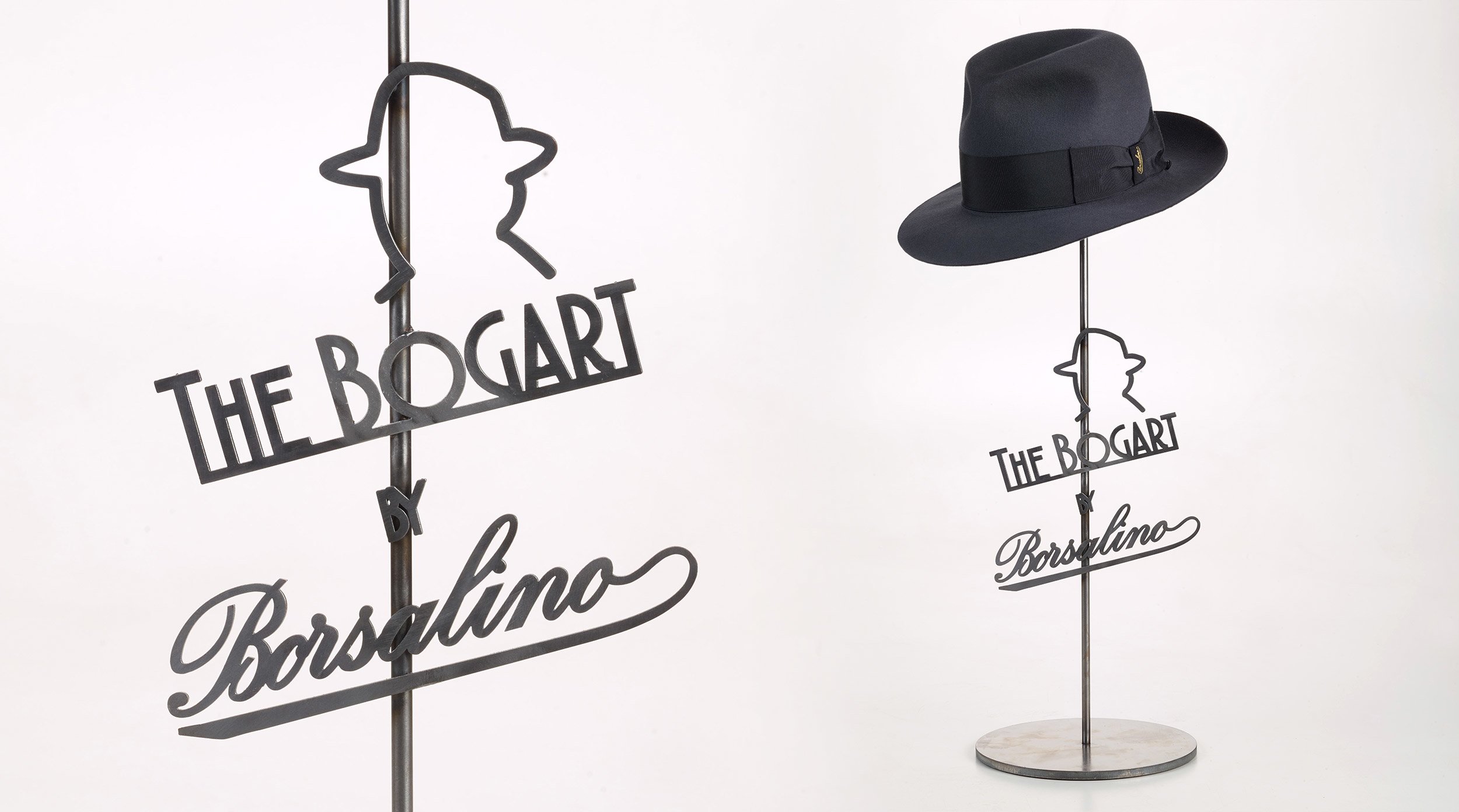 WEAR IT, STYLE IT, INTERPRET IT.

In honor of this style icon, Borsalino has captured shared inspiration with a series of street style video clips and pictures: Wear it, Style it, Interpret it from both Bogart aficionados and new fans.