The production of Borsalino felt hats begins in the Alessandria manufacture, with animal hair or wool which is blended, carded and blown in a machine built at the end of the nineteenth century to separate the outer and softer part of the hair. This phase lays down the quality of the felt. A special machine then begins the process of creating the hat: it combines suction and jets of hot water so that the fibres are matted and form a felt cloche which is then strengthened and made more compact. The cloche undergoes its first manual inspection. Once it has been approved by the Borsalino craftsmen, the cloche is soaked in boiling water to shrink it to the required size. After drying, it is time for dyeing and twin shaping: the hat begins to acquire its desired shape and size. The surface of the felt is then refined: it is sanded down until it reaches the right shave. After a third shaping, the hat acquires its final shape, followed by another quality check by the Borsalino specialists. A process known as flanging gives the hat its definitive circular form and is ready for the final finishing steps, done by hand: trimming, stitching, checking and packaging.

1- Blowing - Basting
All felt hats start with the raw materials. The hair is mixed, carded and blown using special wooden machines made in 1857 that select the softest parts for basting. This phase consists in allowing the hair to rain down onto a perforated metallic cone which spins and has an air suction jet. Centrifugal force means the hair adheres perfectly to the surface of the cone, creating a felt cone which is fixed with a jet of boiling water.

2- Prefulling - Inspection - Steeping
Once the felt hood has been basted, it needs to be strengthened using two special machines, the “rollettina” and the “gheisa”, that help the fibres lock together. At this point the hood undergoes the first of three quality checks: the one known as inspection, which is carried out on a backlit table in a dark room. The craftsman checks that the backlit surface of the felt is uniform. If this is the case, the next step is steeping, when the dimensions of the hood are shrunk by bathing it in water heated to 100°C.

3- Fulling - Hood assembly - Dyeing - Shrinking
The felt hoods are further shrunk using three specific machines, which are all similar, using hot water and mechanical movement. This process is known as fulling. The felts are then moved to the “white warehouse” to be assembled and sorted according to quality. In the next step the felts are dyed, using machines set at atmospheric pressure and at boiling point. The hoods are then left to soak for 90 to 240 minutes according to the weight of the felt. After they have been dyed, the dimensions of the hoods are further reduced with a process similar to soaking: shrinking. The experience and skill of Borsalino workers is crucial to this step. 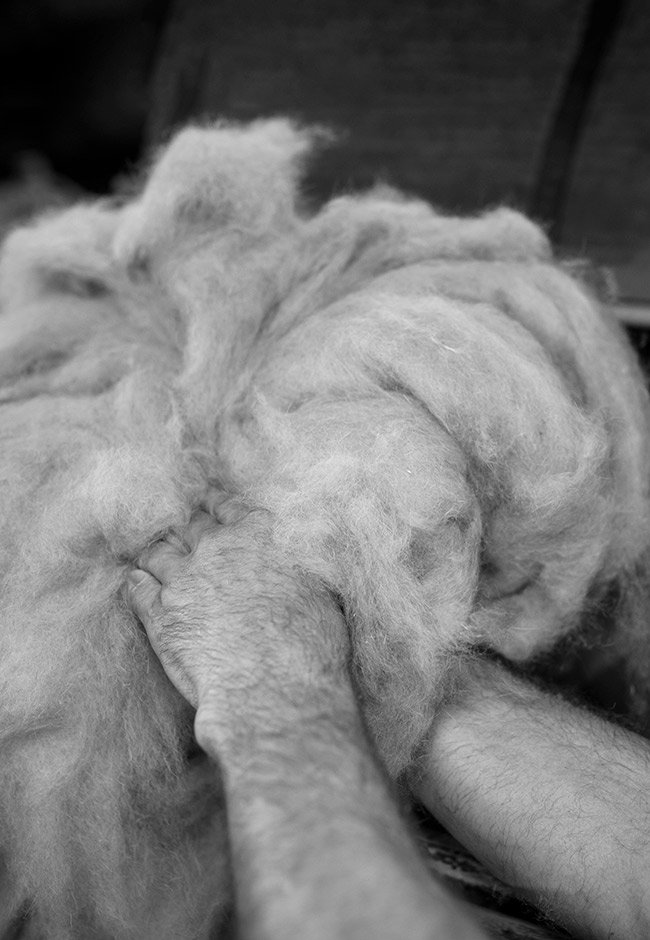 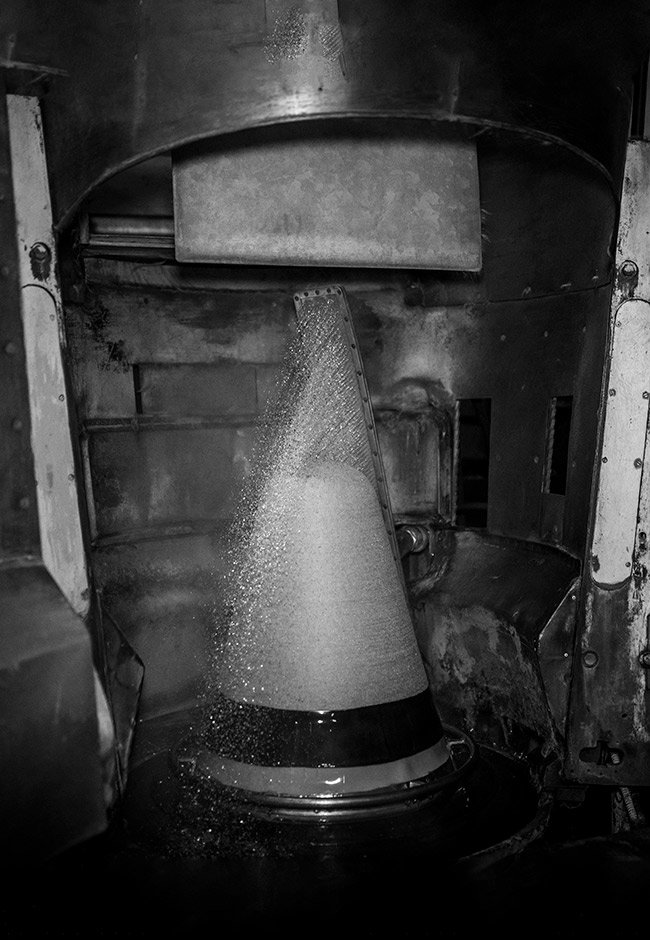 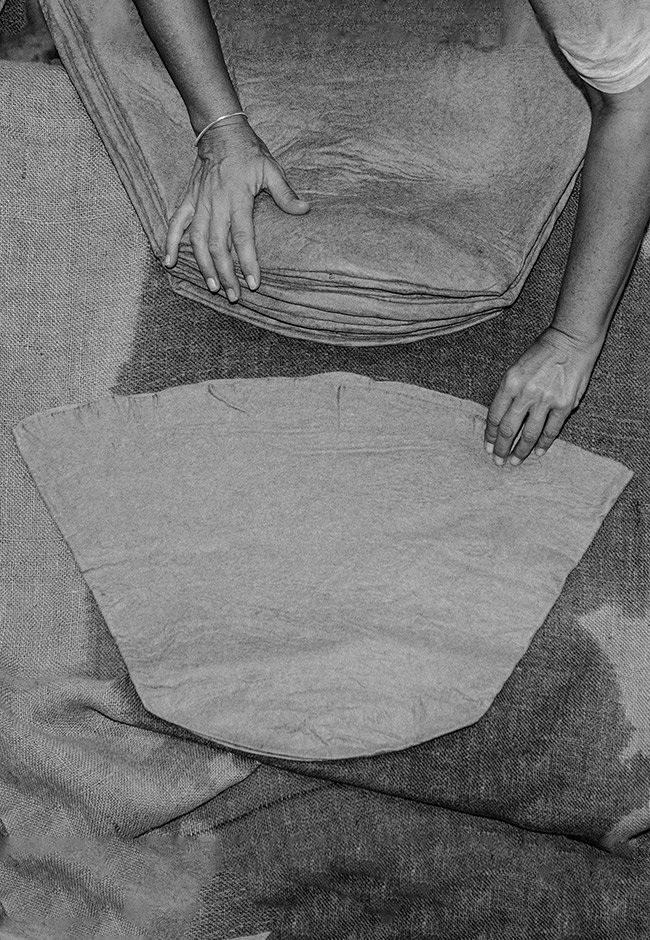 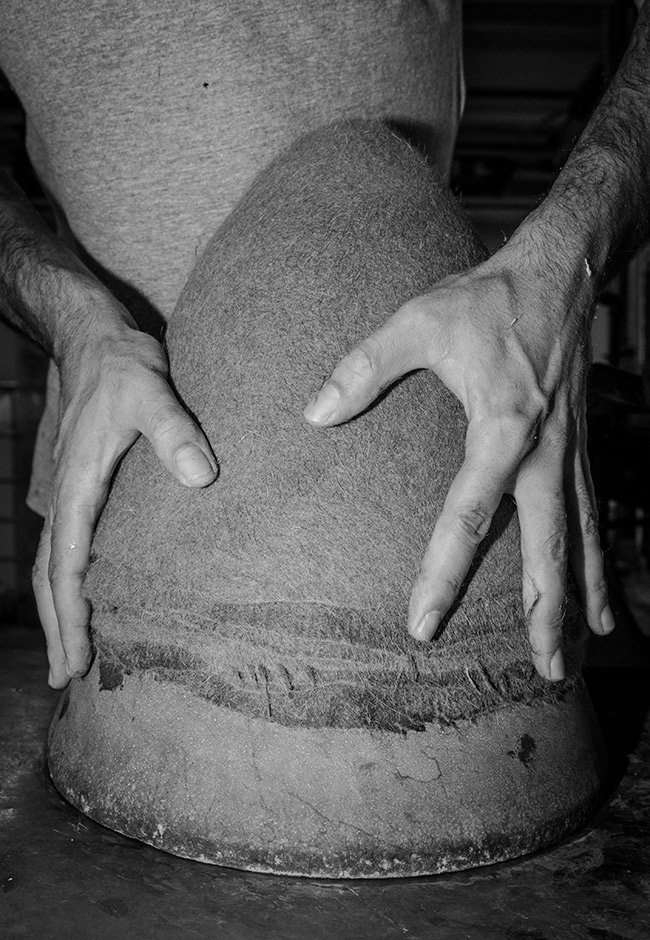 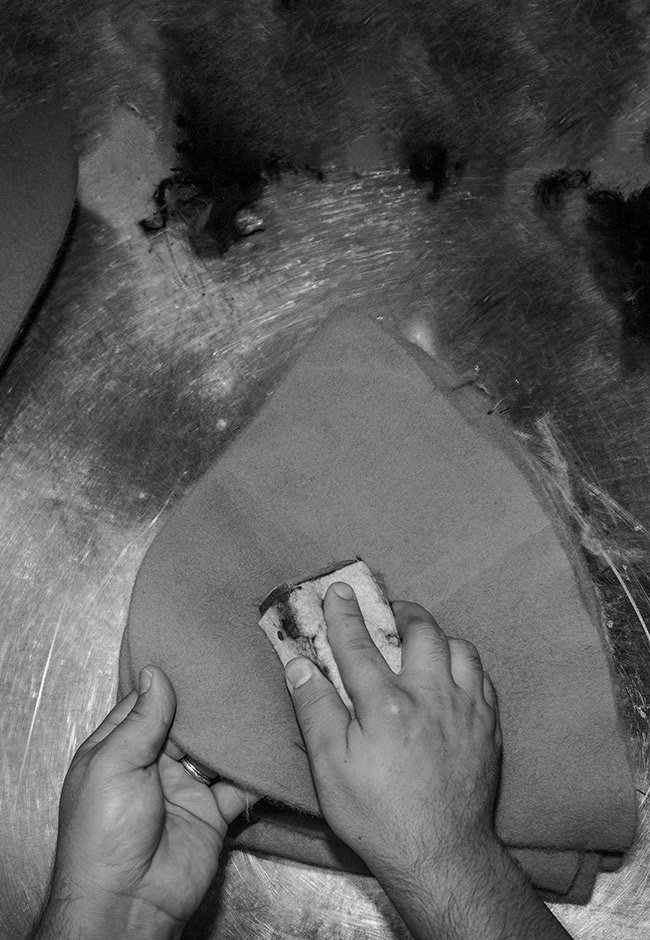 4- Stiffening - Scotti Steam Shaping
It is time for a fundamental stage: the transformation of the felt hood with its conical and rigid shape into a capeline. The stiffening machine has a large claw that breaks the weave of the felt in order to make a first division between the crown and the brim. In order to produce an even clearer division, a natural glue is used, lac. It is then time for Scotti steam shaping, a process named after the craftsman who invented it for Borsalino: the felt capeline is first placed in a machine that used atmospheric pressure and steam and then pressed with an aluminium block. When it emerges, it will have a well-defined crown and above all a size.

5-Pumicing - Second Shaping - Inspection
After the initial shaping the surface of the capeline is shaved so that the felt is smooth to touch and to see. This is accomplished using special pumice papers and fire. As in the preceding steps, the skill of the craftsman is fundamental as these operations are done by hand. The capeline is then shaped a second time, using blocks and presses to form the specific shape of hat.

6-Flanging - Finishing
After a second quality check, the hat is flanged. The brim of the hat is trimmed by hand by a craftsman and then curled using the flanging machine. The final step in Borsalino production is finishing, when all the accessories are applied on the surface of the hat: lining, sweatband, ribbon and bow. Applying the gold Borsalino brand is a very important moment. Hot stamped in gold leaf, it is the distinctive touch that distinguishes the hats made in Alessandria throughout the world. 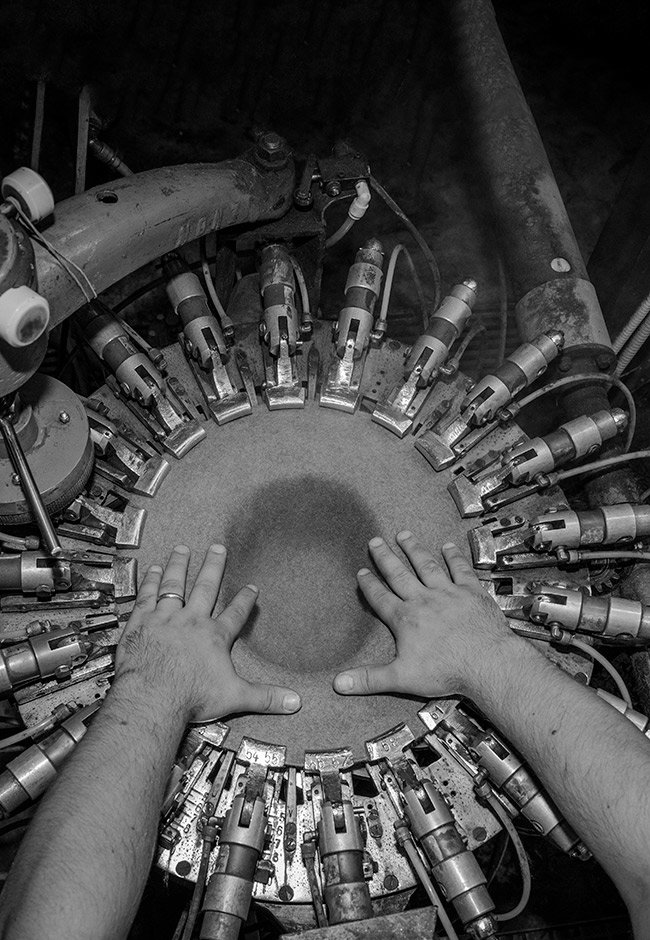 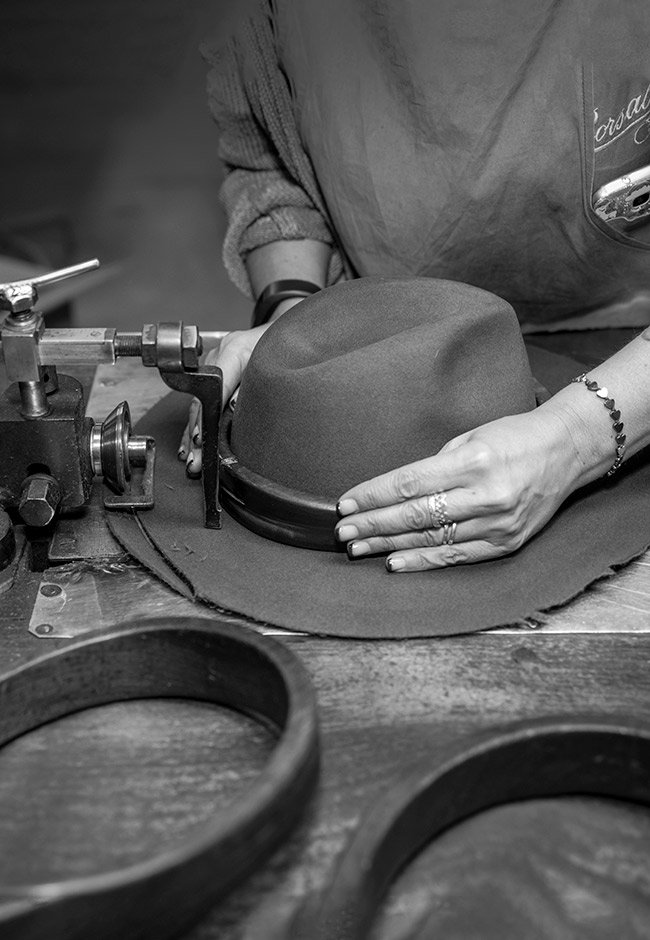 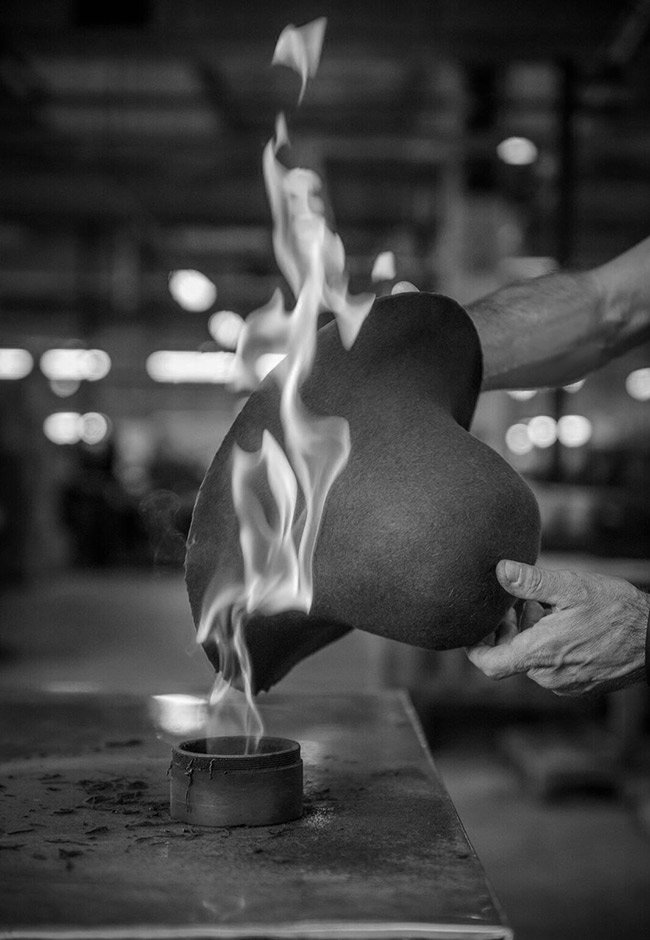 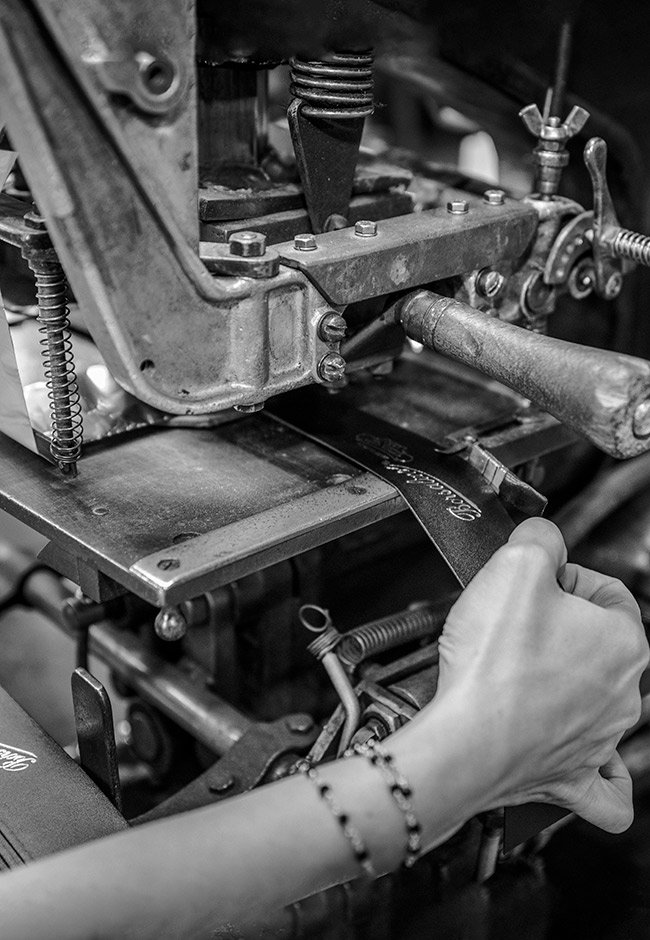 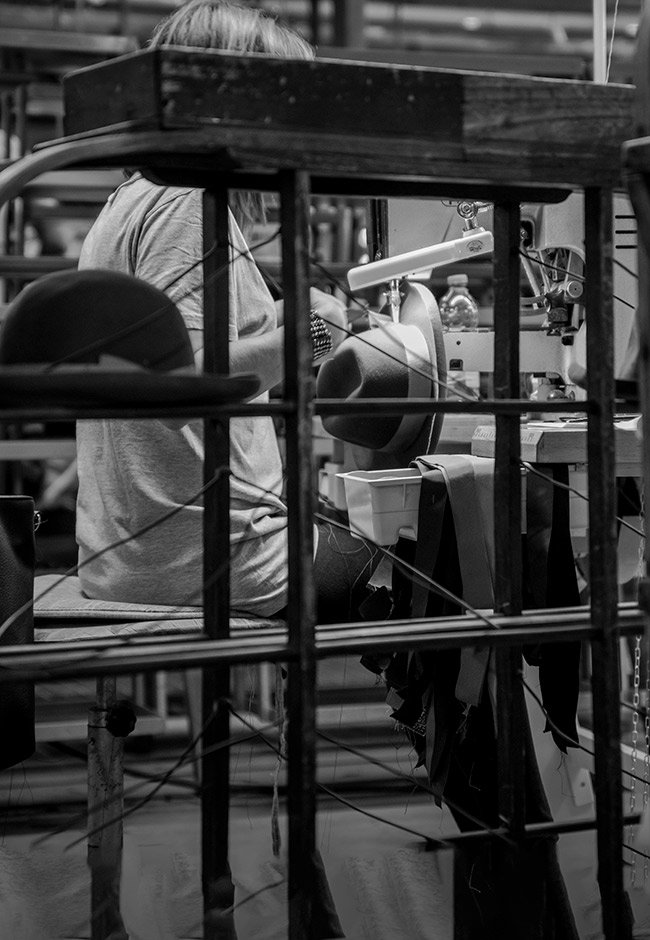